The history of the CT6 will have been a short one, and sadly its coming demise is proof of the confusion that has reigned at Cadillac in recent years. First introduced in 2016, the model is already reaching the end of the road. According to a new report by Speed Twitch website, production will officially and definitively end in January 2020.

The CT6 had already been living on borrowed time, s Cadillac had originally decided to stop production of the model this past June. GM then gave it an extension of a few months, as it did with the Chevrolet Impala.

What’s disconcerting about the decision to axe the product is the excellence of the model – the CT6 is arguably the finest vehicle Cadillac has ever produced. It was showered in praise when it debuted on the market, as much for its styling as for the impressive interior. The sedan gave Cadillac a strong weapon to go into battle with rival luxury sedan makers. But here we are today… 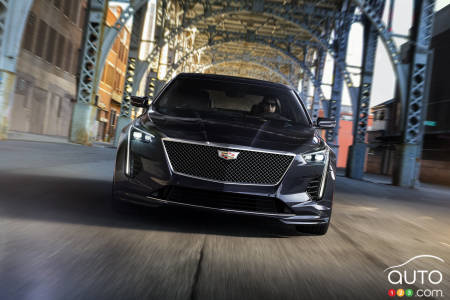 Another element of the decision goes beyond disconcerting into the category of surreal: when Cadillac announced it was axing the model, the CT6-V variant had yet to even make its debut on the market. It’s as if BMW were to present, with great fanfare, a new engine for its X7 SUV… and then right afterwards announce it was discontinuing the entire line of X7 models.

Surreal, we tell you. And it’s not because the company wants to pull the plug on all of its sedans either. The new CT4 and CT5 cars are scheduled to make their debut in the coming months.

It’s worth noting that the CT6 will continue to be produced for the Chinese market, where the sedan still owns a larger part of the market.

Sadly, the end of production for the model means 815 workers will get pink slips. Those who are unionized may be reassigned or be offered early retirement, but for those who aren’t, early 2020 will involve finding new work.

Cadillac to Return to Real Model Names, Spurred by Electr...

Cadillac has announced it will return to giving its models real names and not alphanumerical designations. The transition will come as the company gradually ...