General Motors has long made clear that its electrification plan, which includes the introduction of at least six new EVs in North America by the time 2027 rolls around, will be led by Cadillac. We’ve seen the Lyriq, and we’re going to see the crazy-expensive Celestiq, but we’ll have to see more if Cadillac really is going to lead the charge for GM.

To that end, Automotive News reports that the luxury automaker is working on a smallish crossover EV that will be the unofficial electric counterpart to the existing XT4, currently the smallest SUV in the stable. The model is scheduled to be ready in late 2024, and will be built at GM’s Ramos Arizpe plant in Mexico, which is set to be refitted to accommodate production of EVs. As per Automotive News, Cadillac is prepared to sell the ICE XT4 and the new EV side-by-side, at least for a while.

GM Authority speculates that the future EV will be built on a downsized version of GM’s BEV3 platform used for the Lyriq, and receive the Ultium battery pack (capacity 100 kWh) and Ultium Drive electric motors. It won’t then be surprising if the vehicle gets a range somewhere in the neighborhood of 480 km.

It’s also been reported that Cadillac has filed trademarks on names like Vistiq, Ascendiq, Optiq, Lumistiq and Symboliq, any of which could be affixed to the rear end of the future small EV. 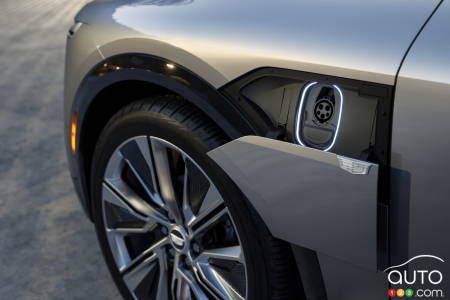 Deliveries of Cadillac Lyriq EV Will Begin Within a Few M...

GM President Mark Reuss said this week that first deliveries of the Cadillac Lyriq will happen within the next few months. The all-electric SUV’s debut, if a...