Yesterday, Cadillac confirmed that it was moving forward with producing a high-performance V version of its largest SUV, the Escalade. A requisite teaser image was accompanied by a short video previewing the sounds that will come from the V8 engine destined for under the hood.

Cadillac also confirmed that it would present the model in full today. That it did, but only of its exterior. When it comes to the interior and most especially to the technical specifications, we will have to wait.

The 2023 Escalade becomes the first SUV to carry the V badge. And the design of the beast leaves little doubt that high performance will be the order of the day.

We also note that the front bumper has been completely redesigned. Instead of the single piece that adorns the regular model, this Escalade it has a separate section in the middle, which has additional air intakes, as do the spaces for the LED fog lights that sit at the ends.

New grey multi-spoke wheels are also visible, as well as a quad exhaust at the rear and a rather stylish diffuser. 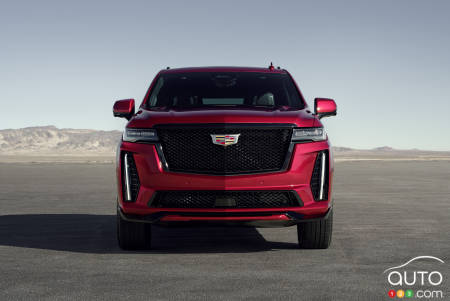 All of the vehicle's accents are black to highlight the body colour, and V logos are clearly visible on the tailgate and doors. The logo also appears in the one detail image of the interior, on the bottom portion of the steering wheel.

We'll have to wait, thus, for confirmation of the supercharged V8 engine that will sit under the hood.

Another open question is whether this will be Cadillac's last V model to hit the market. The company had mentioned at the CT4-V and CT5-V Blackwing unveilings that these would be the last gasoline-powered V cars, but it didn't say anything about SUVs. Could the Escalade be followed by an XT4-V?

That could be interesting, but it's pure speculation at this point. Cadillac is saying nothing.

What could also be in the works is a V version of the Escalade's extended variant. Car and Driver magazine spies spotted it on test drive, so it’s certainly possible. 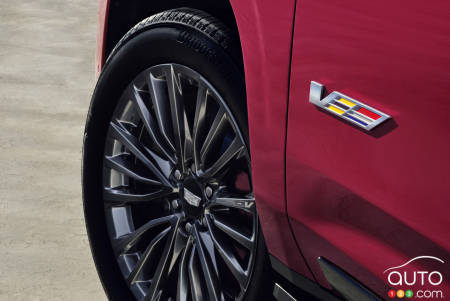 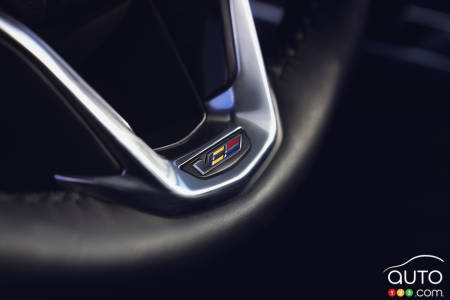 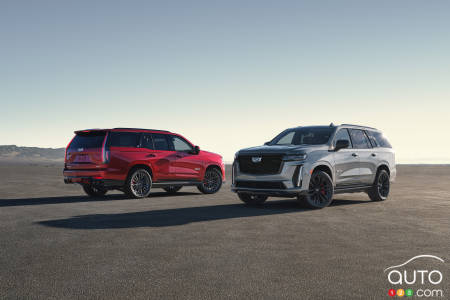 Photo: Cadillac
2023 Cadillac Escalade V, in red and in grey

Cadillac Confirms Escalade V is On the Way

Cadillac confirms the arrival of the V variant of its Escalade SUV. A tweet yesterday made it public and more information is expected today.

Cadillac has a problem every automaker would like to have; the most popular version of its big, pricy, lucrative Escalade SUV is the most expensive trim in t...