Over the years, motorists have become accustomed to massaging seats on many vehicles, especially of the premium variety. One day, we may well discover the benefits of foot massages while driving on the road.

It has come to light that General Motors (GM) has filed a patent for a system that allows vehicle passengers to get a foot massage while the vehicle is in motion. And we mean passenger, meaning not the driver, of course! The company’s patent application describes the feature, but let’s be clear, GM has not publicly announced whether it intends to bring this innovation to market.

GM's application was filed in February, after which it was noticed by the Jalopnik website. The patent filing describes a system that allows the technology to be integrated into the floor, much like current systems are placed inside seats. It’s not exactly clear if the system would be integrated into the floor mat or into an additional surface placed on the floor or within it. 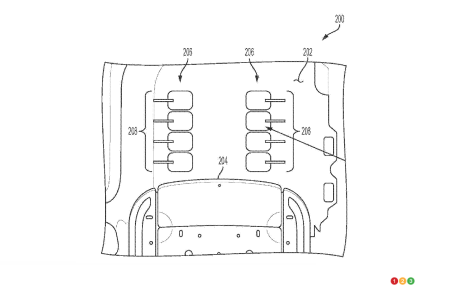 Essentially, the system is thus an electric air pump that inflates a series of interconnected cushions, all in a pre-programmed sequence that simulates a massage.

Assuming that luxury brand Cadillac would be the first to get such a feature, which model might be first in line? The Escalade SUV has just been redesigned, so it’s probably out for now. But it could well be baptized in the upcoming Lyriq electric SUV, or else the Celestiq sedan that will be positioned as the most luxurious and expensive car in GM's portfolio. Built largely by hand, the latter model will cost over $200,000 when it hits the market in 2022. A foot massage system sounds logical for a vehicle in that price category.

The fact that a manufacturer files a patent doesn’t mean that his invention will see the light of day, of course, but it’s always interesting to see what luxury brands are looking at as new technologies to satisfy their customers, but also to stand out from the competition.

GM’s transition to electric mobility is being spearheaded by Cadillac, but with only two EVs known to be in the works, the luxury brand will have to step up ...