In case you’re wondering which was the most responsive suspension system before, well it was the third-gen suspension the MagneRide 4.0 is replacing. Cadillac says the 4.0 version will be up to 45 percent faster than its predecessor.

The new MagneRide 4.0 shocks will be standard equipment on the 2021 CT4-V and CT5-V sedans, and will be offered with the CT5 Sport where they will be part of a V performance package that will also include additional suspension enhancements and a limited-slip differential.

They will be standard on the 2021 Escalade Sport and Platinum 2021 models, and available on some other of GM’s full-size SUVs. 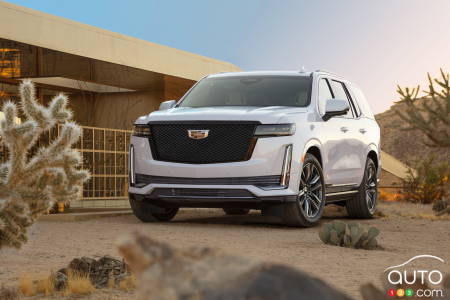 The benefit of a more-responsive suspension is that it adapts more instantly to changes in road conditions and, as a result, helps maintain the optimal level of comfort on board, as well as the best possible contact between the tires and the road surface.

As the name suggests, the MagneRide system features dampers filled with magnetorheological fluid, which is a mighty big word that essentially means a liquid whose viscosity can be adjusted using a magnetic field. The higher the viscosity, the stiffer the damping; and vice versa.

In the MagneRide system, electromagnets are used to control viscosity based on road surface information, which is collected by wheel sensors and an inertial measurement unit (body motion measurement). In the new 4.0 version, these measuring systems work four times faster than with the previous generation.

Cadillac explained there are also new systems to monitor friction and temperature inside the shock absorber, which results in smoother, more consistent performance, especially during performance-oriented driving.

It’s a virtual certainty that we’ll see MagneRide 4.0 shocks includes standard on the upcoming Blackwing versions of the CT4-V and CT5-V sedans.

Photo: Cadillac
The MagneRide 4.0 suspension will be included in the 2021 Cadillac CT5-V

The electric Hummer has been confirmed by GM and an ad showing us a little more of it will be aired during the next Super Bowl. What's attracting attention a...