Just days ago we reported on the possibility that General Motors was shelving plans for a new generation of the Chevrolet Camaro, meaning the model could cease to exist beyond 2023.

Now comes word that plans for producing a Z/28 version of the current-generation Camaro have been cancelled by GM as well. The Z/28 occupies a mythic role in the life of the muscle car; Chevrolet had produced such a version near the tail end of the model’s previous generation. But now it appears the current Camaro won’t get one.

The planned new Z/28 was to have received a new naturally aspirated 6.6L V8 engine, to be known as the LT3.

The decision itself is easy enough to explain. GM’s highly publicized restructuring plan meant there was no way for the company to invest large sums and resources for low-volume products like the Z/28. The funds originally earmarked for the variant were diverted towards programs to develop electric products and autonomous driving technologies.

Fans of the Z/28 do have an alternative choice to fall back on, however. Much of the spirit of the Z/28 lives on in variants like the ZL1 1LE. This version is lighter, more aerodynamic and features a sport suspension system.

All it’s missing really is the cache of the Z/28 name. And that name might now be gone forever. 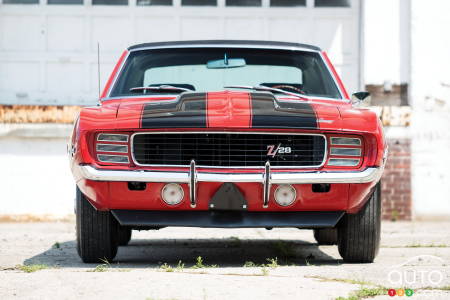