Might GM really be on the verge of axing the Camaro for a second time in 20 years? Reports indicate that it’s a possibility, although no decision has been made internally at the company. Still, it appears the muscle car may well not survive past the 2023 model-year.

This would certainly cause an unpleasant feeling of déjà-vu among Quebec automotive workers who experienced the model’s cancellation in 2002.

Our List of the Top 10 Best Chevrolet Camaros in History

The possibility that the Camaro might die a second death was raised by Muscle Cars and Trucks. The outlet reported that, according to several sources at GM, the development process for the next-generation Camaro is currently suspended. What’s more, there’s little optimism there that it will start up again. 2023 is the last year the current-generation Camaro is supposed to be offered.

It’s no surprise that General Motors is not confirming the report, and in fact it would be unthinkable for any automaker to confirm the demise of a model four years before its cancellation. Media outlet Motor1 contacted the automaker and got no response other than that GM would not comment on any idle speculation. The company also added that new variants are scheduled for 2020 – something we reported previously when GM announced esthetic and strategic adjustments being made for the next model-year. 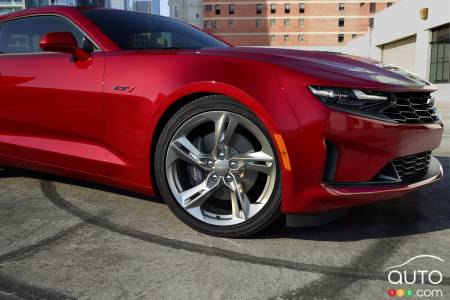 Scratch a little, however, you find certain indications that the new reports are credible. For one thing, sales of the model have been in free fall since it was revamped in 2016. Just under 51,000 units of the Camaro sold in 2018, the lowest total since its return at the turn of the present decade. The first quarter of 2019 was no better either, the tweaks made for this year having had no real effect. Hence the further adjustments for 2020.

Also relevant to this story is that the chassis of the Camaro was also used for the defunct Cadillac ATS and CTS. Chevrolet could produce a new platform, but whether it would want to is a valid question.
Muscle Cars and Trucks reported furthermore that several members of the team assigned to creating the next-gen Camaro have been rerouted to other projects at the company.

All of which give grounds for pessimism.

That 2023 date is still far off, however, and reports are that no decision has been made at the company. Certainly, we can assume that GM will be spending the next 12-to-18 months looking closely at the model’s sales performance within its category. If sales rebound and the Camaro regains favour among buyers, it’s unlikely the automaker would put an end to it. But if the current sales decline continues….

In short, the next two years will determine the fate of this muscle car.