General Motors (GM) had hoped to launch a diesel engine for its Chevrolet Silverado 1500 and GMC Sierra 1500 trucks this year, but a delay in getting certification for the new engine from the Environmental Protection Agency (EPA) means that won’t happen.

The certification process is taking longer than expected, throwing off GM’s production schedule. Automotive News got hold of a memo sent to dealers advising of a slight delay in the delivery of trucks fitted with the new turbodiesel engine. Customers who had pre-ordered these versions will have to cancel them and place a new pre-order once the powertrain has gotten the EPA’s stamp of approval.

So, while the engine is ready to go, and the company all set to begin production, everything is on hold. And at this point it’s impossible to know just when the whole process can once again spring into motion. A GM spokesperson told Automotive News that it should happen soon, but provided nothing more specific. For its part, the EPA has declined to comment about the certification process. 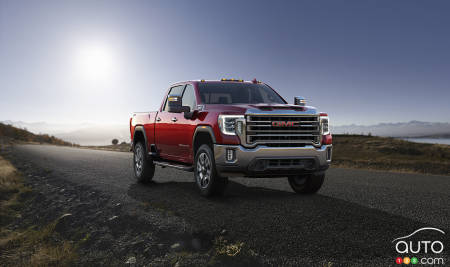 The 3.0L straight-six Duramax engine in question will generate 277 hp and 460 lb-ft of torque, wedded to GM’s 10-speed automatic transmission. As of now, its towing and load capacities have not been divulged, nor have any fuel consumption figures.

Currently, buyers looking for a 1500-series truck with a diesel engine have only Ford to turn to; the company’s F-150 is available with a 3.0L V6 turbodiesel powertrain. RAM is hoping to bring out a diesel-powered engine as well, but has announced nothing concrete yet. Recall that we previously had a RAM variant called the EcoDiesel, available a few years ago.

We’ll be attending the launch of the 2020 Chevrolet Silverado HD version this coming June, and we’re hoping to learn more about the upcoming diesel version at that time.