For a while, this game really was all BMW followed by the rest. By “this game”, I’m referring specifically to the performance two-row SUV game, because while Mercedes did have the AMG versions of the M-Class, it was the eventual arrival of the BMW X5M that really put performance first - thanks to its power, yes, but also its wonderful handling and purposeful looks.

Then, around 2002, that other other German brand – Porsche – came along with its Cayenne, and though at the time Porsche fans and sports car fans alike were up in arms, the automaker quelled the rebellion by delivering an SUV that could go toe-to-toe with many of the vehicles that those fans held so near and dear to their hearts.

Now we’re in 2019, and both vehicles have received comprehensive updates for this year. Here’s how they match up. 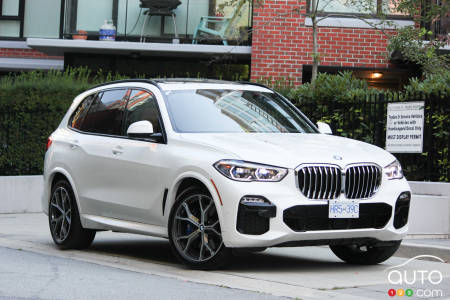 While we haven’t yet seen the X5M version of the latest X5, the xDrive40i version is no small player in this game, what with its 335 hp, 330 lb-ft twin-turbo inline six and 8-speed automatic transmission. That’s some serious power and while some may lament the lack of a V8, they can opt for the xDrive50i option that provides 456 hp and 479 lb-ft. It also starts at about 15 grand more than does the XDrive40i, which is worth keeping in mind.

Style-wise, the 2019 X5 is a bolder, more aggressive take on the model with a new extra-large grille, optional BMW Laser headlights with their bright blue cores and new 3D LED taillamps. Add a variety of wheel choices and you have an X5 that’s come a long way in the looks department from the sometimes bulky, sometimes bulbous original. 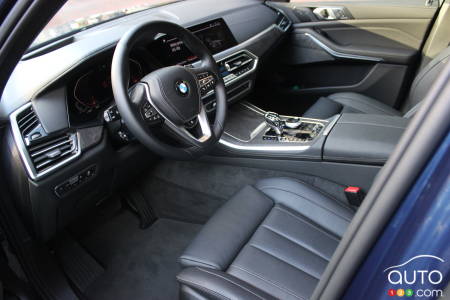 Inside, the current X5 is simply gorgeous, especially our tester, whose “Cognac” leather is just right in terms of tint and quality. Everything that’s not finished in leather either gets silver-look or piano black. You can refine the interior even more through the BMW Individual program.

The X5 now gets the latest version of BMW’s infotainment tech, which provides a digital gauge cluster and ultrawide main display screen, both of which can be modified to display different widgets, apps and so forth. You can get everything from your navi map stretching across the whole display to a traditional two-gauge set-up. Once you add the intuitive BMW Assistant feature that can start your car for you – not to mention wireless Apple CarPlay integration – you have a fully-featured cockpit.

Ensconced
As gorgeous as the interior is, it needs to be able to walk the walk, too. At this level, that means comfortable seats with enough adjustability to keep any body supported and comfortable. The items both front and back are up to the task (and also came heated and cooled in my tester), and while they’re a little flatter than those in the Cayenne, that’s not saying much because, if we’re honest, most of the competition’s seats are flatter than the Porsche’s. 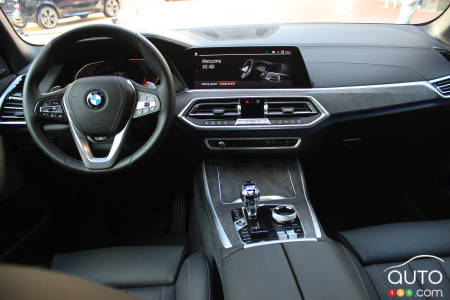 Other comfort-focused features include dual-pane windows to reduce wind noise, as well as optional air suspension that adds comfort but can also add capability as it can be raised for better off-roading. It can also be lowered for more ease of access and better aerodynamics.

Speaking of ease-of-access: the split tailgate is a real refreshing take on cargo loading. The top portion of the tailgate can be shorter and more easily reached by shorter people when open, and the lower portion of the tailgate helps keep your load in place when it’s up. And if you’re worried something will roll out once it opens, the tailgate extends the bed floor to keep any stray item from falling to the ground. 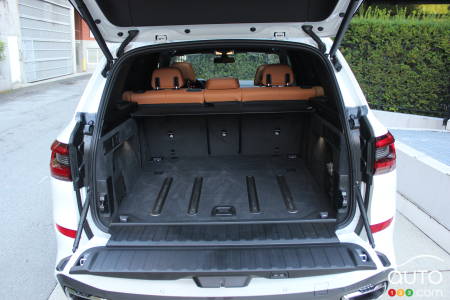 Turbo power done right
Though turbocharged, the X5’s TwinPower turbo is developed with efforts to reduce turbo lag as much as possible and so power comes on quite smoothly and quickly, without so much of the peakiness you can get from turbo motors. As such, the X5 doesn’t feel as turbocharged as much as other similarly-powered vehicles do.

While the X5 can be raised to better handle off-road work, this is a vehicle that will mostly be used for runs to the mall and hockey practice and runs up to the cabin, so it needs to handle itself well on the beaten track. As for the steering, it’s as responsive as a BMW should be, though it’s still down on feel a little. While it’s better than previous, you still get that feeling that there’s an air bubble between the wheel and the front axle that’s muting some of your inputs.

Get past that, though, and for the first time perhaps ever, the non-“M”  X5’s handling package can actually hold a candle to that of the Cayenne. 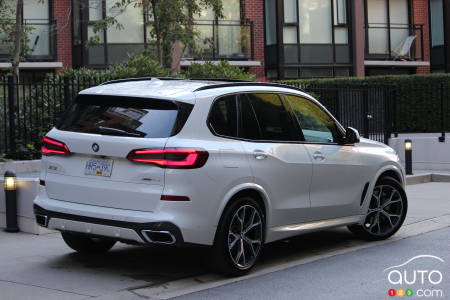 Conclusion
There’s a whole heck of a lot to like here, and it’s easy to see why the X5 – along with its X3 sibling – continue to be the hottest sellers in North America for BMW. It’s roomy, tech-laden, extremely accessible and has the performance that a performance-lite SUV like this should. The Porsche has its work cut out, it genuinely does. 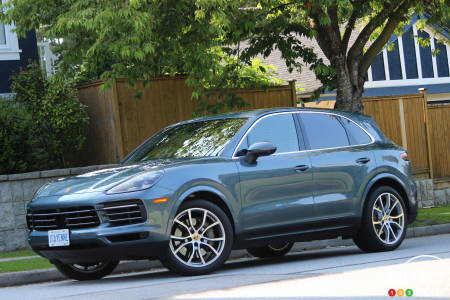 As with the X5, there are numerous engine choices for the Porsche; ours was powered by a 3.0L twin-turbo V6 good for 434 hp and 406 lb-ft of torque. Rght off the bat, you can see that in the numbers sense, it has a leg up on the BMW. Like the X5, however, the transmission is also a single-clutch as opposed to the dual-clutch found in higher-end models.

It remains a very slick transmission, though, so much so that I found myself using the paddle shifters for manual mode more often during my time with the Porsche than the BMW. Why? The powertrain, but also the handling package. It’s just so dynamic that it makes you want to do whatever you can to make it feel as sports car-like as possible. The steering is perfectly weighted and responsive – that’s a definite one-up on the X5 – the body is well controlled thanks to the (optional) adaptive dampers, and everything just flows so smoothly once you’re behind the wheel that you just never want it to end.

The seating position in that deep bucket seat is just about perfect – just as it is in the company’s various sports cars – and the wheel falls nicely into your hands. Somehow, though it is a tall-riding SUV, it just doesn’t feel like that when you’re sat in it. That’s what happens when your body roll is so well-controlled. 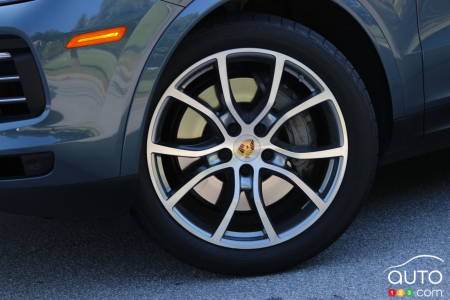 Give and take
A ride like this is always going to have its drawbacks, the main one here being that no matter how I set the dampers, the Cayenne’s ride always felt just a little on the firm side. Couple that with a more cramped-feeling interior than that provided by the X5, and you can see how the division between these two cars is not as distinctive as it once was.

I’ve also had the opportunity sample the Cayenne in an off-road environment, and, like the X5, it handles itself with more gusto than you’d think thanks to adjustable suspension and well-implemented drive modes. 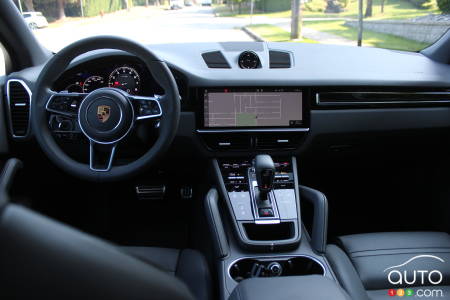 Upping the user experience
Things don’t get any clearer between these two when you consider each vehicle’s infotainment systems and creature comforts. Like the X5, the Cayenne received an all-new system for 2019 that reduces the huge button count around the shift lever in favour of a larger touchscreen and a selection of touch panels. The overall look is a cleaner, less cluttered one and so user-friendliness should be improved as a result…which it is, but partially.

You see, the thing about traditional buttons is they’re a little easier to operate without taking your eyes off the road since you’re fingers get to know their shapes and so forth. Luckily, the touch panels on the Cayenne provide haptic feedback, so at least you know when your inputs have been received. The video display itself is a colossal step up on the old system, what with its tiny buttons and unintuitive menu interface. The touchscreen is responsive (and you don’t’ have to navigate it with awkward dials as you did previous) and the German quirkiness found on the old car is all but gone. Or, just go ahead and use the standard Apple CarPlay if you want to bypass all of that. Conclusion
For 2019, the Cayenne has turned the nice trick of becoming more technologically advanced without losing all the good stuff – body control, handling, power – that a bare-bones performance vehicle provides. It’s a very strong effort from Porsche, and the fact that it can even sit so closely to the X5 features and comfort-wise is a very significant paradigm shift.

There’s little question in my mind that the X5 is the more comfortable vehicle in which to sit. The seats are more forgiving, that air suspension hits it out of the park and it just feels roomier inside. Add the great tailgate tech and latest iDrive system, and you can see how BMW has spent years refining their big seller to the point where it really does seem like the flagship vehicle of the brand.

While the two may be similar performance-wise on paper, no matter what the BMW tries with the X5 xDrive40i, it will never tackle the turns like the Cayenne does. The Porsche serves as a fantastic reminder of just how far chassis, engine and powertrain tech have progressed to the point where the Cayenne feels like a sport car.

While the Cayenne was originally quite an awkward-looking thing, it’s come a long way and is now a very handsome ride. Not better-looking than the X5, necessarily; just different. Each vehicle has its strengths – the BMW is a little more luxurious looking, the Cayenne a little more lithe – so I have a hard time seeing how styling will be a huge deciding factor between these two.

You won’t get the same people-moving practicality with the Cayenne, and you won’t get quite the performance chops with the X5, so where does that leave us? You could say it leaves us asking just which vehicle would be better to own in the long run, which really comes down to questions of practicality, performance and durability.

While we can’t really know how that third element will play out between these two for now, we can sure get a feel for the other two and by those criteria the X5 just barely takes it.

While I love the Cayenne’s performance and merely like the X5’s, the latter does so much of the everyday stuff so well that I think it’d be the vehicle for me in the long run. Of course, I may change my mind just by waking up on the other side of the bed one day, but for now, it’s the X5 by a hair.

Steering still down on feel
A little underpowered

How to choose between the 2019 BMW X5 and the 2019 Mercedes-Benz GLE? Auto123.com compares two of the big guns in the luxury midsize SUV category, who are ou...