We suspected that its days were numbered, but confirmation has now been made by Hyundai itself: the Veloster N will not return for the 2023 model-year. Thus, the models still available now at dealers are the last ones consumers can still get new.

For driving and performance car enthusiasts, this is sad news - the Veloster N received strong reviews from pretty much all corners since its debut in 2019. However, with the demise of the subcompact Accent, the chassis of which was used for the Veloster, it was obvious that the three-door oddity was going to follow before too long.

The Accent, it's important to remember, hasn't been offered here for over a year, though its sedan version is still part of the offering in the U.S. But that’s coming to and end, and since the withdrawal of that model from the catalog for next year has been confirmed, the death knell had to sound for the Veloster N.

Hyundai is giving a two-fold explanation for the decision to axe the last Accent. First, the little Venue SUV is meant to be the replacement for the Accent, and they want to give it all the spotlight possible as the brand’s entry-level model. This is already the case here and it will be same story south of the border next year.

Second, Hyundai mentions the arrival of N versions of the Sonata and Kona models. Motorists wanting to scratch that performance itch can now get satisfaction with either of those models under the Hyundai banner. Incidentally, we had the chance to drive one of these at Mosport, Ontario, last week. The least we can say is that the Elantra N has what it takes to make you forget about the Veloster N. 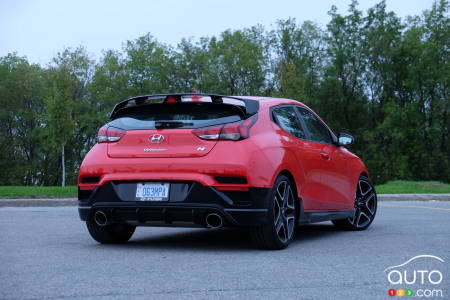 The 2023 Audi RS5 is still as comfortable as ever, although the German brand has upped the ante in terms of aggressiveness and performance with the introduct...