For the third time in the last 10 years, the FCA Group (Fiat Chrysler Automobiles) has registered the Cuda name with the U.S. Patent and Trademark Office.

What does this mean? Let’s try to guess.

First of all, let's remember that protecting trademarks on nameplates is a common practice. When a name is registered, it is patented for a certain number of years; eventually a manufacturer must re-apply for a trademark to hold on to its rights. In the case of the Cuda name, FCA made a first application in 2010, and repeated the gesture in 2017. This is thus the third patent application in 10 years.

The application, filed on October 12, was spotted on the MuscleCarsAndTrucks website.

This does not mean that a Cuda model is imminent. However, it could well indicate that the automaker has a model in the works to which the name is destined, or that it has vague long-term plans for the name and simply wants to keep the rights to the name. 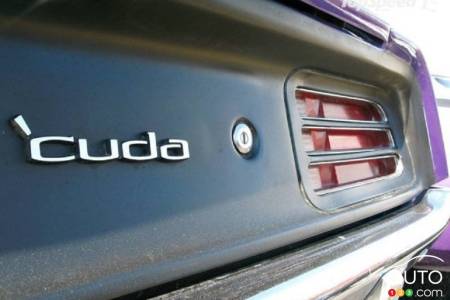 Another important nuance. The application for the Cuda name is different from the one made on June 23, 2015, which was for the name Barracuda. That patent was abandoned by FCA, but the automaker might well come back with a new application to protect the name. Barracuda was of course once the name of a legendary Plymouth model, while "Cuda" was actually used to designate a version of it.

Is Dodge really planning something? According to MuscleCarsAndTrucks, the name Cuda could actually be used for the first electric-powered Dodge. The company has confirmed nothing at this time, but other recent Dodge patents point to a hybrid powertrain coming down the road.

The current Charger and Challenger are both aging and changes will very likely occur over the next two to three years. Electrification is in the air. There’s also FCA’s fusion with Peugeot to consider.

It’s all speculative fun and games for the moment, but when we see company firm making a sustained effort to preserve its rights such a mythical name, our duty is to keep an eye out.

The Next Dodge Journey To Be Built on an Alfa Romeo Base?

The Dodge Journey is overdue for a big revision, so it’s not surprising to see rumours begin to crop up regarding what the future holds for the model. Right ...