We've known for some time that Subaru is developing an electric vehicle in conjunction with Toyota. This week, we get the first details about it as the company has revealed the model’s name and teased two images.

The Solterra name is the combination of two words, "sol" and "terra", Latin for sun and earth. The company chose this nomenclature to emphasize its appreciation of nature and to advance the idea of coexistence with it. And, of course, to shine a light on the move to electric power.

Electric or not, however, it’s a safe bet the SUV will feature a sturdy AWD system; it's still a Subaru product after all. 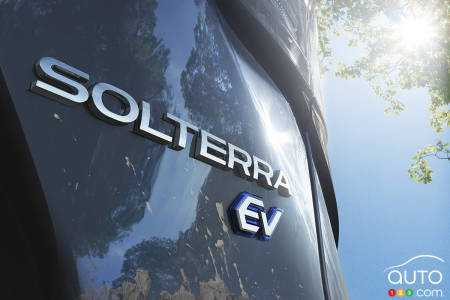 The two images shared introduce us to what, generally speaking, the model looks like. The first shows the badging intended for the tailgate, including the EV letters. The second teases the SUV's lines and reveals a relatively tall front end, angular headlights with LED accents and a surprisingly slender C-pillar.

Otherwise, details are intentionally hidden, for instance what the front grille will look like. We can make out a resemblance to Toyota's bZ4X, the other model born of the two firms' collaboration.

Neither company has released any technical information about the models, so figures on range, power, acceleration and charging times will have to wait for another day. As mentioned, we do know that all-wheel drive will be offered, likely through a multi-motor approach, with one responsible for driving the rear wheels.

More information on the Subaru Solterra will be released in the coming months. The model could make its official debut before the end of 2021 or early 2022, which would mean arrival at dealerships in the summer or fall of next year. 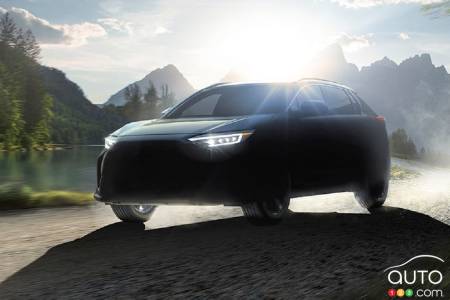 Auto123 puts the 2022 Subaru Outback Wilderness to the long-term test. Today, part 5, as we wonder who's actually in charge here, anyways. The rise of driver...

Subaru has unveiled the next generation of its Crosstrek SUV. Many details are still to come regarding the North American models, but we can already confirm ...

Auto123 puts the 2022 Subaru Outback Wilderness to the long-term test. Today, part 4, in which we decide to go out into the woods.