The Rivian company has attracted all sorts of attention since it made its splashy entrance at the Los Angeles Auto Show last November. Other than the two all-electric models it presented there - the R1S SUV and the R1T pickup – speculation about possible partnerships has been rife since then.

One of the names that surfaced in this regard was General Motors, but the first real initiative came from Amazon, which announced an investment of $700 million USD.

The latest big name to climb on board is Ford. The automotive giant has announced it will throw in $500 million to acquire a minority share in Rivian and a seat on the company’s board. This seat will be occupied by Ford president Joe Hinrichs.

For Ford, this is in addition to the $11 billion it has already committed in previous announcements to the development of electric mobility solutions. 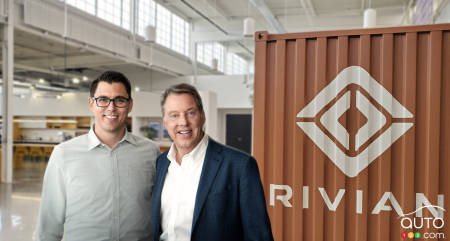 The deal
Details regarding the agreement between Ford and Rivian are scarce for the moment, but we know enough to understand the general gist of it. Rivian will give Ford access to its EV platform; the latter says it will use the architecture to develop a new electric-powered model.

What’s not known at this stage is what kind of product that will be. Ford has previously said it plans on producing an electric version of its F-150 truck, but will it take the radical (and risky) step of using another company’s platform for the most popular model in its lineup?

For its part, Rivian gets to benefit not just from another big infusion of cash but also from Ford’s technical know-how and its distribution network.

The fledgling automaker is obviously thrilled by the deal:

“This strategic partnership marks another key milestone in our drive to accelerate the transition to sustainable mobility.”

If all goes well, the first Rivian models are expected on the market by the end of 2020.

Here's what Ford boss Bill Ford had to say during the announcement:

“We are excited to invest in and partner with Rivian,” said Bill Ford, Ford’s executive chairman. I have gotten to know and respect RJ, and we share a common goal to create a sustainable future for our industry through innovation.”

At Ford, we’ll be watching to see just what future products make use of the Rivian EV platform.