The kind of news you're hearing today is likely to repeat itself over the coming weeks and months. Ford has made the decision to delay the start of production of its Bronco Sport model by two months. We should actually call it the little Bronco, because Ford hasn't confirmed its name yet.

The reason for the delay is no secret, of course. The auto industry has been in low gear for weeks and most assembly plants have been shut down.

Ford has thus informed all concerned parties that the start of production will be pushed back from July 13 to September 7, or approximately two months. This is courtesy a report by Automotive News, which cited some of the U.S. manufacturer's suppliers. Those sources said that parts for the first pre-production units were supposed to ship this month to Ford's plant in Hermosillo, Mexico. The impossibility of this is reason number-one the automaker has apparently postponed the start of assembly until September 7.

If the postponed New York Auto Show does go ahead in August, we could see the Bronco Sport make its debut there, just days before the start of production. If the pandemic does prevent that event from going ahead, entirely possible since host venue the Jacob Javits Center is currently being used as a makeshift hospital, Ford may go ahead with a virtual presentation of its little SUV. For now, Ford has declined to comment on the model or any revised schedule. 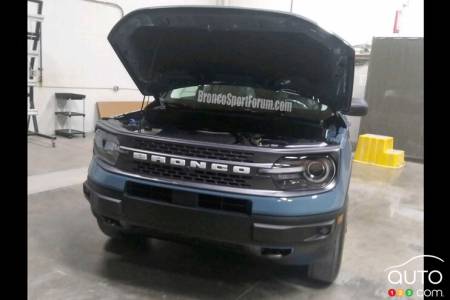 We do know it will be based on the C2 platform that already serves the latest Ford Escape. The Baby  Bronco will also share that model’s 1.5L 3-cylinder and 2.0L 4-cylinder engines. The rumor mill mentions the presence of the 8-speed automatic transmission that Ford developed with GM, also in use in the Escape. However, instead of a front-wheel-drive configuration, the Bronco Sport could be equipped with all-wheel drive.

A screenshot of Ford's dealer ordering system showed several option packages and variants, including the First Edition, Badlands, Big Bend and Outer Banks. Ten exterior colour choices will be on the menu, as well as a contrasting roof option and two 17-inch wheel designs.

The Bronco Sport won't likely be the only Ford product to see its debut postponed this year due to the coronavirus outbreak. CEO Jim Hackett told a Detroit radio station last month that the new F-150 and Mustang Mach-E could also be pushed back. "If they're a month or six weeks late, I don't think anyone would think we fumbled there because of the virus," he said.

So far, the coronavirus pandemic has not dissuaded Ford from planning a premiere of its new Bronco SUV before the onset of summer. That plan is contingent, h...