Want to get an idea of how severe the shortage of microchips is right now? Take a look at Ford, which has had to make the painful decision to slow down the production of its best-selling and most profitable model.

The company will temporarily apply the brakes on production of the F-150 pickup truck in North America at its Dearborn, Michigan truck plant. The factory will go from three shifts to one next week of May 24 due to the worsening semiconductor shortage, and the other F-150 plant, in Kansas City, will be completely shut down for the week.

In addition, Ford will shut down operations at its Louisville plant, where the Ford Escape and Lincoln Corsair SUVs are assembled, also during the week of May 24.

The auto manufacturer expects the next few months to be the most difficult since the crisis began. It anticipates losses totalling 2.5 billion and believes it will produce 1.1 million fewer units this year. Ford CEO Jim Farley called it the “biggest supply shock” he's ever seen. Dealerships are struggling to fill their yards as inventories dwindle.

And any downtime for production of the F-150 is especially painful. As mentioned, it is the brand's best-selling model. Studies have shown that the F-150 name alone generates more revenue than major companies like McDonald's, Nike, Coca-Cola, Visa and Netflix, according to Automotive News.

Ironically, this pause in F-150 production comes at the same time the company is preparing to introduce the electric version of the model, the F-150 Lightning. We’ll have a full report on the presentation of that truck tomorrow evening. 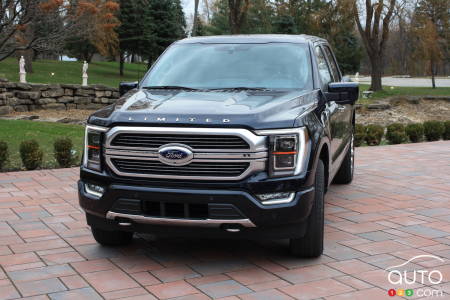 Ford has announced that production of its F-Series model has reached the magic number of 40 million for the U.S. market. The 40th millionth model, in case yo...

For the second time in a few weeks, production of the next-generation 2021 Ford F-150 has been pushed back. The same applies for the date on which pre-orders...