Good news for those who wanted to get their hands on the electric version of the Ford F-150, but saw the order book fill up quickly; Reuters reports that Ford will double its production target to 80,000 units by 2024.

That technically should resolve the supply problem facing Ford, which has reported receiving 120,000 reservations to date for the all-electric pickup. as the company says it has already received 120,000 reservations for its model. Demand is strong both from individuals and businesses. Recall that the Ford F-150 Lightning is being offered in a more stripped-down version (Pro) at a cheaper price (by $10,000) for companies.

To reach its new production target, Ford will be spending an additional $850 million, according to Reuters. What's not clear is how precisely that money will be deployed. In an interview with Car and Driver magazine, Ford mentioned that it will “continue to look for ways to remove constraints and meet the needs of its customers”. 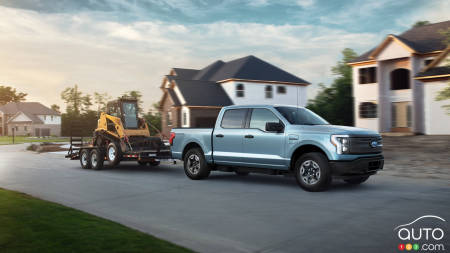 Those constraints are related to the pace of production of an electric vehicle, including the supply of materials and batteries, for one. For another, there have been several major obstacles thrown into the path of automakers in the last 18 months, namely a certain pandemic and now the global shortage of microchips.

Ford has even taken to producing some F-150 pickup trucks without certain critical components, then then sending to sit in dealer lots while waiting for their missing parts. Most notably, the launch of the Bronco has been affected by the supply issues. Clearly, the challenges have been and continue to be many.

However, with a forecast of 15,000 units (again according to Reuters) in the first year rather than trying to flood the market in the model's debut, Ford has set an attainable goal for itself. As a useful comparison, since the beginning of 2021, the company has sold 12,975 Mustang Mach-Es.

By 2023, Reuters reports that Ford plans to build 55,000 versions, and hit the 80,000 mark by 2024. There are other numbers the agency puts forward, though they stretch further off on the horizon. Namely, Ford wants to produce and sell 160,000 electric pickup trucks per year starting in 2025.

That remains to be seen, of course; so much can happen between now and then that making a precise prediction that far into the future is a perilous exercise.

Production Will Be Limited for the 2022 Ford F-150 Lightning

For its first year on the market, production of the Ford F-150 Lightning will be limited to 50,000 units. That could be well short of demand: In the first 12...