When golf star Tiger Woods was injured a few weeks ago in a terrible vehicle accident, much was made of the vehicle he was driving at the moment of the crash: a Genesis GV80 SUV. Though his injuries were serious, Woods survived, and is now recovering at home.

The footage of the accident showed a fairly damaged model, but with a well-protected cabin. For Genesis, it was hard to imagine a better piece of advertising for the safety capabilities of its SUV.

Now, with impeccable timing, the Insurance Institute for Highway Safety (IIHS) has made the GV80 a Top Safety Pick+ following recent collision testing. This highest possible designation means that the SUV passed all crash tests, as well as additional tests involving electronic collision prevention and headlights.

When it comes to crashworthiness, Brian Latouf, head of safety at Genesis North America, told Car and Driver magazine that “you have to design with the end in mind. You start with the front structure, the subframe cradle, the foundational architectural design challenges. Then there are the restraint systems, and the electrical systems to enable those.”

It may all sound simple, but the symbiosis of all the systems and how they work together requires careful planning. In addition, the GV80, in addition to all its electronics, has 10 airbags. 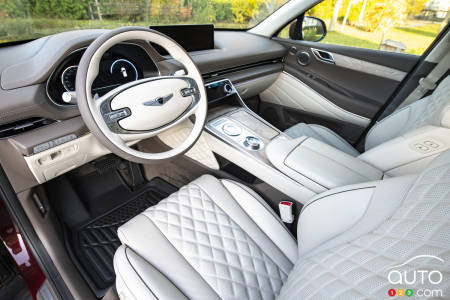 While Genesis is obviously keen to earn IIHS honors, it is not a company that supplies vehicles to the agency. That's why the GV80's crash test results weren't released sooner; it was because the IIHS had to find models to destroy. Explained Latouf, “They buy them from dealerships.”

If a model scores particularly well or particularly poorly, it can then be displayed at IIHS headquarters in Virginia. It's not yet known what will happen to the GV80 that protected Tiger Woods, but it's safe to assume that Genesis will have the opportunity to do its own post-crash analysis once investigators are finished.

From early reports of the accident, it seems clear that the golfer did not activate the GV80's lane-keeping feature. However, the automatic emergency braking is activated at all times and it is likely that this feature helped reduce the force of impact once the model left the road and an accident was imminent. The black box data will tell us. The GV80 is also equipped with a driver attention alert system that Genesis says analyzes driving habits and “issues visual and audio alerts when it senses you should stop and rest for safety's sake”.

Having recently tested both systems, one can only conclude that they are effective.

According to Brian Latouf, safety engineers analyze accidents in three distinct parts: before, during and after. And of course, the best-case scenario is to stay in the first phase and avoid the accident in the first place. But IIHS testing confirms that if a crash does happen, the interior of a Top Safety Pick+ vehicle may be the best place to be.

The Insurance Institute for Highway Safety (IIHS) has named its 2022 Top Safety Pick and Top Safety Pick+ award winners. Auto123 takes a peek at what the U.S...