Hyundai luxury brand Genesis is still in its infancy, but that hasn’t stopped it from taking direct aim at more-established rivals as it seeks to take root in several luxury SUV segments.

Almost as soon as it debuted its first SUV, the GV80, the automaker promised a second model – the GV70 – and is apparently also now working on a sportier variant of the GV80 that would compete head-on with the likes of the BMW X6 in the mid-size coupe-style SUV category.

Information advanced by members of the GV80 Club in South Korea cites anonymous insiders at Genesis. Those sources refer to an SUV that closely resembles the GV80, but with a more-inclined windshield and a sloping roofline. Larger wheels would also be part of the deal. Beyond that, we know nothing for now.

Just as the X6 is an evolution of the X5, the new model would definitely be a variant of the GV80, one sportier in nature and more expensive to buy. What’s more, speculation is it would receive under its hood only the GV80’s most-powerful engine, namely a turbocharged 3.5L V6. Time will tell what Genesis does exactly, assuming it goes ahead with this project, but given the automaker's m.o. we can expect a lot of bang for the buck, that's for sure. 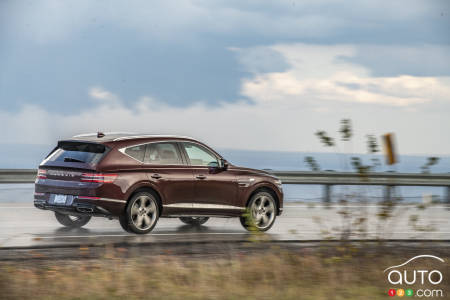 It should be stressed that Genesis has not commented on the rumour and has not signaled its intention to move into an X6-dominated segment. If the information turns out to be true, we'll likely see test models appear within the next 12 to 18 months.

The BMW X6's niche includes the Mercedes-Benz GLE coupe, the Audi Q8 and the Porsche Cayenne. If Genesis is truly in pursuit of all these German rivals, it must give itself all the tools to do so, and that includes variants of already-existing products.

Genesis Considering Adding a Bigger SUV, To Be Called the...

Genesis is considering developing a new, larger SUV to add to its lineup, to be called the GV90, according to a report by Motor Trend. The big question for t...

Genesis has confirmed it will introduce a new range-topping GV80 Prestige Signature edition fitted with second-row captain’s chairs in the U.S. For now, howe...