For a number of years now there has been increasing demand in Germany to reconsider the absence of a speed limit on some portions of the country’s Autobahn network of highways.

The loudest voices asking for change are those of Germany’s Green Party and of environmentalists who want to see the country reduce its CO2 emissions.

For these and other groups fighting the same fight, it’s better luck next time, however. The Bundestag, Germany’s parliamentary assembly, has rejected legislation proposed by the Green Party that would have seen a 130 km/h speed limit imposed everywhere on the 13,000-km network of the Autobahn.

The idea of eliminating no-limit portions of the highway network is a polarizing one in Germany. For some, it’s a logical move due to concerns about safety and environmental impacts. But for many others, the ability to drive at any speed showcases the excellence of the German automotive industry, which churns out vehicles able to drive smoothly and safely at speeds of 250 km/h.

Auto manufacturers in fact use portions of the Autobahn to carry out testing, mainly in low-traffic areas or at night when there’s virtually no traffic to speak of on certain portions of the network. 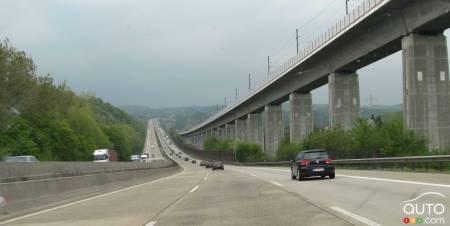 Roughly two-thirds of the Autobahn network permits driving at any speeds, but in many areas, there are limits imposed at certain times such as when traffic is heavy or the weather is inclement.

In portions that do have a speed limit, these are very strictly enforced; and from having driven in Germany on multiple occasions, we can tell you that motorists respect the indicated limits religiously.

So it’s a victory this time around for fans of fast driving, but no doubt those fighting for a change will be back to try again another day.

The Frankfurt Auto Show will be the scene, next September 10th, of the world-premiere launch of the Porsche 918 Spyder. The plug-in supercar, which develops ...

Volkswagen's biggest assembly plant, the Wolfsburg facility in Germany, has now restarted operations. In the United States, resumption of activities at the V...