Airless wheels are not new, exactly. Prototypes have been tested for years if not decades. But up until now, none have advanced beyond that stage and approached being production-ready in mass-market vehicles.

That might be about to change – or at least, it could within five years.

General Motors and French tire manufacturer Michelin have announced they’re teaming up to develop a tire that doesn’t require air.

This is already far beyond the feasibility study phase. The two companies will test a prototype airless wheel called the Uptis on a small fleet of Chevrolet Bolts in the state of Michigan. The technology and its performance will be analyzed and evaluated when the vehicle are put into circulation and have to contend with real-world driving situations.

GM and Michelin plan to carry the project right through to the production stage, and the goal is to have the new airless wheels on production cars available to the public starting in 2024. 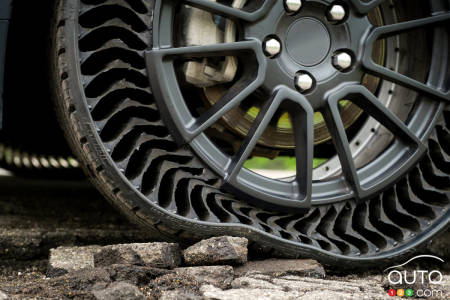 The companies will be looking at a number of factors when the test fleet of Chevy Bolts hits the road. Of course, it’s hoped that the new wheel/tire concept will eliminate wear caused by under- or over-inflated tires and the risks that come with flat tires and blowouts. Analysts will also be testing to see if the new tires have a longer lifespan than traditional air-filled tires.

Challenges that could arise and will be studied closely include increased rolling resistance, which can affect the road behaviour of vehicles and necessitate recalibration of suspension systems.

There’s also the not-incidental question of cost. As is always the case with new technologies, development costs and is reflected in the price of products that integrate these technologies. The hope is that sales will be of such high volume that that initial development cost can be quickly absorbed. 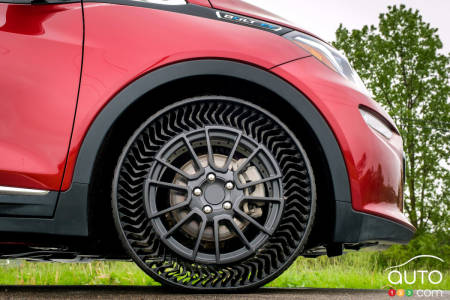 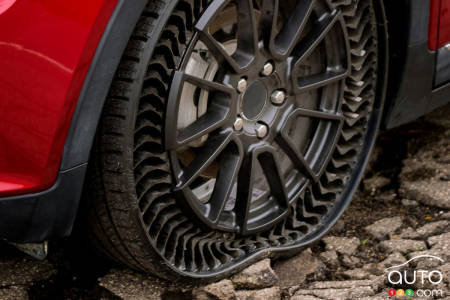 We Test Out New Tires Coming for Next Winter

Auto123 recently had the opportunity to test new winter tires that will be available from Toyo, Continental and Michelin for winter 2020-2021. Here's what's ...

Spring is just around the corner; in fact in your corner of Canada it might already be here. Auto123.com presents our buying guide to summer tires and all-se...