We know that later this year GMC will launch the much-talked-about Hummer EV. It has also been known for some time that an SUV version of the model is in the pipeline. Yesterday, the company announced that that version will get its official unveiling early next month - on April 3rd, to be precise.

And GMC is doing what it can to shine the light very brightly on the all-electric Hummer EV SUV, just as it did with the Hummer EV. The truck was first shown in a spot that ran during the last Super Bowl. This time, the announcement of the SUV version of the Hummer EV will be made at 5:00 p.m. sharp on April 3, during the broadcast of an NCAA (National Collegiate Athletic Association) Final Four basketball tournament game.

The model was first glimpsed during an online presentation by General Motors of its future electric models. From that we know that the styling is the same as the pickup truck and it’s clear that underneath its outer shell will be the same mechanical parts that will serve the pickup truck.

The removable roof-height panels we saw on the truck could also be found on the SUV, which would allow the Hummer SUV to compete directly with the likes of the Jeep Wrangler and Ford Bronco. A third row of seats could also make the product stand out; that's yet to be seen. On a sketch shown by GMC, a tailgate with a spare tire can be distinguished.

As for when the model might debut, think medium or even long term. First will come the Hummer EV pickup, and only then will GMC get moving seriously with the SUV. The pickup truck is set to debut towards the end of this year in the U.S. and in the fall of 2022 in Canada. We might see the SUV appear on our roads towards the end of 2023.

GMC will be sharing more details about the vehicle in the coming days and months. Stay tuned. 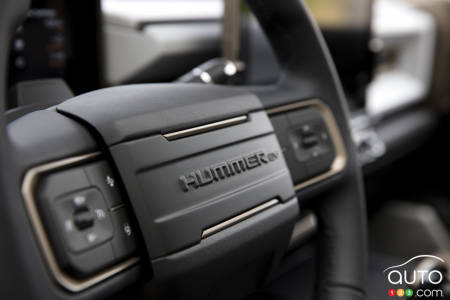 The 2022 GMC Hummer EV, a new paragon of green driving? OK maybe not, exactly, but it is true that the Hummer name has traveled a heck of a long way from its...