GMC presented the SUV version of the GMC Hummer EV this past weekend as part of the March Madness festivities in the U.S. This is of course the second volley in General Motors’s offensive to resuscitate the Hummer name as an all-electric, all-performance nameplate under the GMC banner, after the Hummer EV pickup.

The SUV is thus built on the same platform as the truck variant, and will offer much the same type of equipment and features. Among those is the much-talked about Crab Walk capability, which allows drivers to move the vehicle diagonally to fit the rather massive vehicle into tight parking spots for instance.

The Hummer EV SUV gets GM’s Ultium battery, no surprise there; it will deliver up to 482 of range, according to GMC.

Buyers will choose from one of three configurations for the model, with either one, two or three electric motors. Total output can reach up to 830 hp and – get ready for it – 11,500 lb-ft of torque. With that, this all-electric beast can storm from a stop to 60 mph (or 97 km/h) in as little as 3.5 seconds. 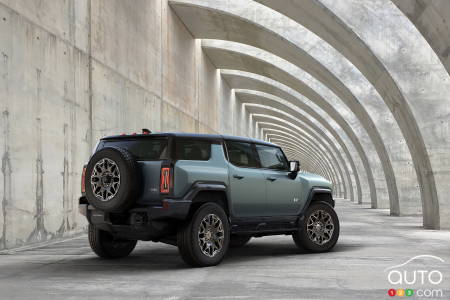 Like the pickup version, the new Hummer EV SUV is designed for rough-and-tumble off-roading, and so its get an elevated ground clearance, improved angles of attack and departure and an optional Extreme Off-Road package that brings with it 35-inch tires, skid plates underneath the vehicle and the UltraVision system fitted with cameras for easier navigating of difficult terrain.

If all this gets you raring to go, best slip your engine into idle, at least for now: the model, says GMC, will enter production early in 2023 – not next year, but the year after, just to be clear – and be sold as a 2024 model. That said, the automaker says it is starting to take pre-orders now, so you can always reserve yours if you want. For a vehicle you won’t get your hands on for two years.

Initially, GMC will offer what’s called the Edition 1 version, fitted with three motors and the Extreme Off-Road package; it gets a starting price of $125,898 CAD. Then, in the spring of 2023, expect to see the two-motor version come online, followed by the single-motor variant a bit later on. The latter gets a sticker price of $88,898 CAD. 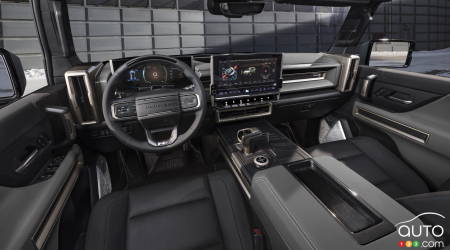 U.S. President Joe Biden had some fun behind the wheel of the GMC Hummer EV. The short test drive of the vehicle was part of a visit to the Factory Zero GM p...

GMC has confirmed it will unveil the SUV version of its Hummer EV on April 3rd. The unveiling will take place at 5:00 p.m. during an NCAA Final Four basketba...

Articles By
Derek Boshouwers
Over Half of Consumers Worldwide Now Plan to ...
Article
2022 Mercedes-Benz C-Class C300 First Drive: ...
Review
The Top 25 Family Vehicles in 2022, According...
Article
More from this author