Honda has outlined an ambitious electrification plan that has it committing to the introduction of 30 new all-electric models. The company also set three more goals:

The company is committing the equivalent of $40 billion USD to the project, which will go, Honda says, to “electrification and software technologies.”

The automaker made the point that to reach its goal, it will follow “a multi-faceted and multi-dimensional approach, not a mere replacing of engines with batteries,” as reported by Autocar.

The company will also invest in developing hydrogen powertrains and battery-swapping hardware to help facilitate the phasing out of gasoline-engine powertrains over the next 10 years. 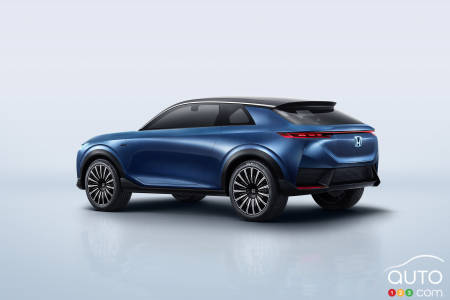 So what about those 30 new models? Honda gave a few details about what we might expect, and one that stands out is that we may yet see an electric successor to the NSX supercar, the current edition of which is set to depart the lineup after this year. We will also be sure to get a new flagship touring sedan, and Honda hints as well that we should expect other sporty EVs among those models to come.

Keep in mind that those targets are for introductions in its home market of Japan and other key global markets like China. We can be sure not all of those new EVs will make it to North America. In the near term, we know the Prologue is coming for 2024, as is a premium equivalent from Acura. In 2027, the plan is to launch several more-affordable EVs that in principle will be priced competitively with gas-engine equivalents. All of these are part of Honda’s expanded partnership with General Motors (GM) that will see them co-develop EVs.

At present, Honda uses lithium-ion batteries from different suppliers, among them GM with its Ultium batteries for the North American market. The automaker says it is investing the equivalent of $343 million USD to build a demonstration production line that should be up and running by the spring of 2024, and it plans to have solid-state batteries powering its EVs in the latter half of this decade.

Concurrently, Honda will launch its new software-integrated 'e:Architecture' EV platform, which will include its latest-generation Sensing autonomous drive technology.

Sony and Honda have finally confirmed their plans to create a new company dedicated to electric vehicles. If all goes according to plan, Sony Mobility Inc. w...

Honda and Sony Will Jointly Produce One or More Electric ...

Honda and Sony have announced they will indeed offer an electric vehicle, to be produced in collaboration. The future EV, which could be ready by 2025, will ...