Due to the coronavirus outbreak, the Hyundai group has said it is suspending production in South Korea, where it assembles more vehicles than anywhere else. It becomes the first automaker outside of Chine to take this step. The company is being forced to slow down production due to a disruption in the supply of parts, notably wiring harnesses normally sourced in China.

Hyundai has seven plants in South Kore, which serve the local market and regions in North America, Europe and the Middle East, among others. Hyundai's domestic production accounts for approximately 40% of its global manufacturing.

Hyundai's decision to shut down assembly lines could delay deliveries of popular models like the Palisade, or even the debut of models such as the new Genesis GV80.

Two of the suppliers concerned, Kyungshin and the Yura Corporation, stated that they were trying to boost production at their factories in South Korea and South-East Asia to compensate for the disruption in supply of components from China.

They also plan to resume manufacturing in their Chinese plants after February 9.

"We are in an emergency situation," a Kyungshin official told Reuters magazine. Hyundai's decision to shut down assembly lines at home comes at a time when it is in recovery mode globally, and that recovery could be affected. The automaker recently posted its best quarterly profit in more than two years and said it was on track to increase profit margins, helped by higher sales of SUVs like the Palisade and Kona.

Hyundai already halted production of the Palisade last weekend due to a shortage of components from China.

Most of Hyundai's South Korean factories will be completely shut down as of Feb. 7, with some production lines expected to restart on Feb. 11 or 12, said a union official who refused to be identified given the sensitive nature of the issue.

"We are looking at various measures to minimize disruption to operations, including finding suppliers operating in other regions," the company also said in an email statement.

"Hyundai Motor will closely monitor developments in China and take all necessary steps to ensure the rapid normalization of its operations," the automaker added. 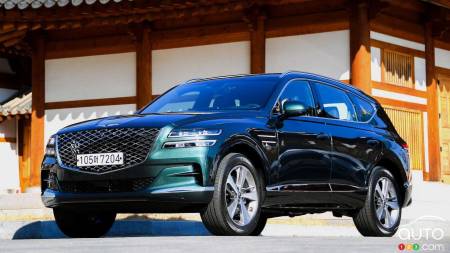 Which vehicles offer the best overall value in 2019-2020? Auto123.com investigates in totally unscientific fashion and comes up with the best choices for you...

Kelley Blue Book, recognized as a reference in the automotive industry by companies and consumers, has handed out its Best Buy awards for 2021 in a number of...