We’ve known since late 2019 that Hyundai’s N performance division was going to work on a beefier version of its popular Kona crossover. Since the spring, we’ve also known that the sporty edition of the Kona will offer up 275 or so hp from its powertrain, thanks to a 2.0L turbocharged 4-cylinder engine already seen in the Veloster N, and get an all-wheel-drive configuration.

Now, lest anyone forget that this little pocket rocket is on the way, Hyundai has released some new holiday-themed teaser images, as part of an Instagram post.

See also: AWD and 275 HP for the Hyundai Kona N

What else we know
Hyundai has also confirmed that the N will be based on the reworked new Kona coming to some markets early in 2021, and a few months later to North America as a 2022 model. The product offering for the Kona N will include some exclusive colour options. 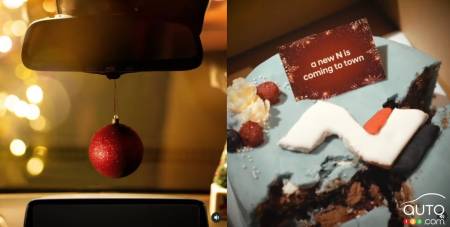 Photo: Hyundai
Images reminding us a Kona N is coming

What else is rumoured
Beyond that, Hyundai has so far kept mum on – and refrained from teasing with images – the interior of the N-badged Kona, but speculation is that it will get a 10.25-inch infotainment screen and an instrument cluster of the same size, making for a lot of screen space. Expect as well contoured seating, ambient lighting, maybe even contrasting stitching for the upholstery.

Buyers will likely get to choose between a 6-speed manual gearbox or 8-speed dual-clutch automatic transmission.

Remember as well that Hyundai is going to introduce a Kona N-Line variant, which looks and even acts a little sportier but is not a true N performance version. That variant is expected at dealerships in the second quarter of 2021. 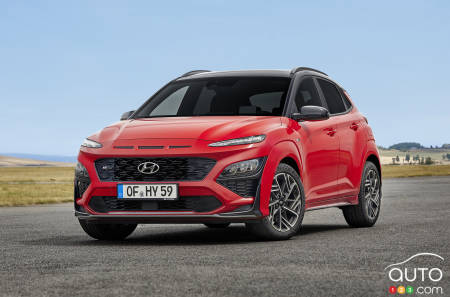 Hyundai has given an early preview of its Kona N with some images that preview quite a lot actually. Aesthetically, from the looks of the performance variant...