That manual transmissions are an endangered species in the automotive landscape is news to no one; the trend has been clear for a few years now. In recent years only 3.5% to 4% of vehicle sales have consisted of models equipped with a manual gearbox.

I remain unconvinced that its demise is imminent, however. More on that in a bit.

It’s clear, though, that the format is in serious retreat. And the two latest models to see the manual gearbox offering reduced or eliminated carry the Hyundai badge. The Korean automaker announced this week that it would no longer offer the option on its Elantra sedan or on certain versions of the Veloster in the U.S.. At the same time, Hyundai Canada confirmed that the formats will continue to be available in Canada, where the manual transmission is holding its own slightly better.

In the case of the Elantra, the GT hatchback variant will continue to have the manual transmission in the U.S., in fact the base model comes with it by default and buyers will have to pay extra to get the company’s dual-clutch automatic transmission. 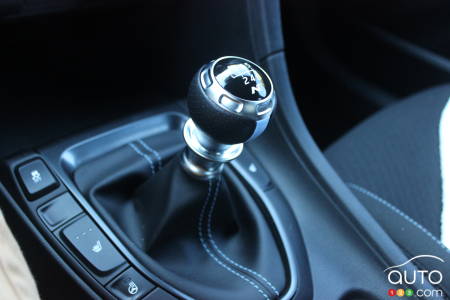 As for the Veloster, some turbo-engine versions will continue to be offered with the manual, but American consumers will have fewer options available to them. Most likely, those options will include the base model or the Veloster N variant that debuted this year.

As mentioned, Hyundai’s move is only the latest in a series of similar decisions across the industry, so it is no surprise. But does this mean the manual transmission is on its way out completely?

In fact, some automakers claim they are going to war for the format. Toyota for example has declared forcefully that the manual transmission is here to stay on certain of its models, and other companies like Cadillac and Aston Martin have promised that some of their upcoming new models will feature it in the product offering.

What it boils down to is that as long as there is some demand for it, the manual gearbox will stick around.

That demand might not be that strong anymore, but it’s still there. Remember, they said vinyl was going to disappear…

Among several announcement made by Hyundai today, one revealed the company’s plan to expand its lineup to include seven N or N Line model variants by 2022.

Effective now, Hyundai Canada’s new rebate program for Canadian military includes up to $1,500 off the purchase or lease of a new Hyundai vehicle after taxes.

NACTOY 2021 Winners Announced: The New and the Old

NACTOY last week announced its choices for 2021 Car, Utility and Truck of the Year, and their picks highlight how the industry is changing at a breathtaking ...