Things aren't getting any better for Hyundai and its fire-related safety recalls. This time, more than 390,000 vehicles are being called back to the shop in the U.S. and Canada to address two separate issues that could cause engine fires.

The largest campaign involves more than 203,000 Santa Fe Sport models from the 2013 to 2015 model-years, of which 52,304 are in Canada. Transport Canada describes the problem the models may be experiencing as follows: “On certain vehicles, brake fluid can enter the brake Hydraulic Electronic Control Unit (HECU) and cause a short circuit. This recall replaces R0172 (Transport Canada recall 2020-410). Vehicles that were repaired under that recall also require this repair”.

Owners are advised to park their vehicle outside and away from structures until the issue is resolved. Hyundai will “notify owners by mail and instruct you to take your vehicle to a dealer to have the HECU inspected and replaced if necessary. The dealer will also replace the ABS multi-fuse.”

The problem has caused 18 fires in the U.S., but no injuries, according to documents that were released by the National Highway Traffic Safety Administration (NHTSA).

Hyundai says this recall will improve on the fix provided in September 2020. The company says it continued to investigate after the last recall and found that replacing the fuse would reduce the safety risk. “Hyundai is conducting this new recall to ensure the safety of its customers,” the company said via a statement. 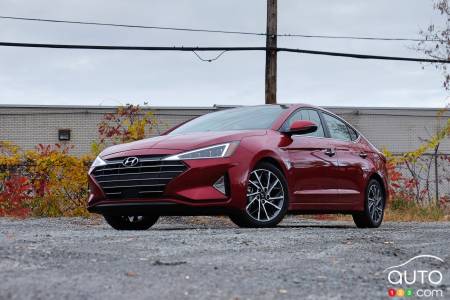 The other recall involves nearly 187,000 2019-2020 Elantras, as well as 2019-2021 Kona and Veloster models. Of these, 60,968 units are located in Canada. All are equipped with the 2.0L 4-cylinder engine. In their case, “the engine's piston oil rings may be defective. This can cause engine wear that can lead to increased oil consumption. Eventually, this can create abnormal engine noise and the oil pressure warning light may turn on. If you continue to drive the vehicle with these symptoms, the engine could fail,” explains Transport Canada.

As for the fix, Hyundai says it “will notify owners by mail and instruct you to take your vehicle to a dealer to inspect the engine. The engine will be replaced, if necessary. The dealer will also install a Piston-ring Noise Sensing System (PNSS) software update, to alert the driver of potential damage before an engine failure occurs.”

Engine failure and fire issues within the Hyundai-Kia Group have affected more than eight million vehicles in just over five years.

Hyundai is expanding a recall on its Accent and Elantra models. The problem involves seat belts that may not function properly in a crash.