Kia Canada brought an early pre-production version of the EV6 for show and tell. The upcoming all-electric crossover should be ready for market early in 2022.

Toronto, ON - You may recall that when we attended an introductory session with Hyundai’s Ioniq 5 electric model last month, the good folks at Hyundai showed off the vehicle’s bi-directional charging capabilities by having it brew coffee. As in, power a coffee maker.

Well Kia decided to go one better with its upcoming EV6, likewise endowed with said bi-directional charging abilities. On this summer evening, the automaker had the early pre-production version power one of the amps through which we were hearing a brief but energetic concert by Canadian artist Fefe Dobson! 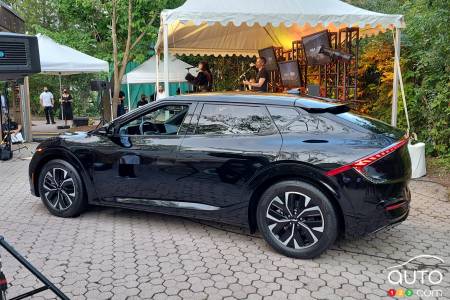 While it was great to be able to partake in something so normal as a concert after so many months without public activities, we were also there for more serious business. And that was to get a close-up look at and feel of the EV6, which is set to usher in a new era for Kia as it moves towards electrification of its lineup.

Opposites united
This is the design slogan that guided the designers of the EV6. In real terms, that means they sought to give the model a sporty, aggressive front end as well as a more traditional family SUV practicality the more you move backwards, and then inside to an environment Kia promises will be serene, quiet and inviting. 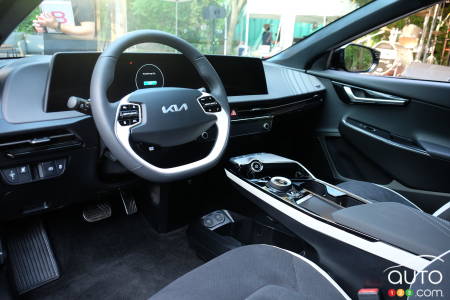 Certainly the front end of the EV6 is flashy, its profile sleek. The vehicle leads with sharp headlights and a clamshell hood and lines are drawn to give the model a very low coefficient of drag. The back end is no slouch, particularly with the wrapround lighting (all lights at both ends are LED on the new model), but I see Kia’s point about it being more traditional. There is an integrated spoiler, which harbours a welcome light that, well, welcomes you as you approach.

The version on display on this night sat on the model’s standard 19-inch wheels, but there will be optional 20-inch and 21-inch wheels available to make the SUV’s stance more aggressive. To that end, a key distinguishing feature, one designed to help create separation between the three versions of the EV6 Kia will sell in Canada, is the lower front bumper. Each of the EX, GT-Line and GT variants will sport a different one. About those variants: the EX is the base model, and it comes standard with one single motor and thus will be rear-wheel drive. Output from this configuration is given as 225 hp. Buyers can get the EX with all-wheel drive as well, in which case power jumps to 320 hp. After that comes the GT-Line, which carries the same specs as the EX AWD but gets some mainly esthetic enhancements for a sportier appeal.

Last - and most - is the GT variant, which is of course all-wheel drive with the two motors and delivers the kind of numbers that will make potential buyers salivate and perhaps agree to spend the significant extra amount it will cost to get it. Output with this variant is 576 hp and torque is set at an impressive 446 lb-ft.

Other numbers: the battery pack of choice for all three versions is a unit with 77-kWh capacity, and the expected (though not yet confirmed) range is 480 km. Kia says charging capacity will be such that owners can boost charge from 10 to 80 percent while they stand around waiting for a mere 18 minutes. 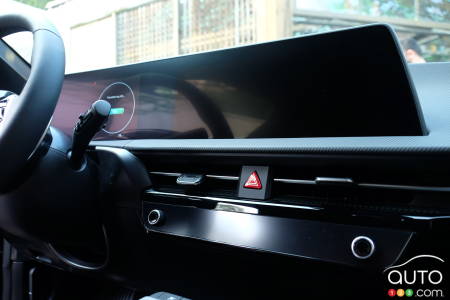 The inside of this pre-production EV6 is more embryonic than the outside, so we were not invited to either sit in the back row of seats or even take a gander inside the trunk. Which of course gave us all visions of cheap cardboard elements scotch-taped into place to act as placeholders until the real live pieces are ready to put in.

No matter, because we did get a view of the business end of the interior, which is the front row and its driver-centric dash and gauge display. It’s a very spacy area, mainly because the EV6 has a fully flat floor. And it will be a sun-bathed space as well, if buyers opt in the near-full-width panoramic sunroof (not on the model we saw). Kia says the cargo space of that mystery trunk should amount to roughly 700 litres.

The multimedia screen is an impressive sight, stretching as it does in a convex arc across most of the dashboard. But since we were not authorized to start the vehicle, we couldn’t see it in its best light, so to speak. That will be for another day. Also for another day is the pricing of the 2022 Kia EV6; Kia is not ready to divulge that yet. But you have to expect a fairly wide gulf between the price points of the base version and the range-topping GT. Call it the Tesla model of EV pricing.

We left the event feeling even more excited about seeing the new crop of all-electric crossovers go head to head against each other and, especially, try to dent the Tesla juggernaut. By this time next year our roads could be home to not just the Volkswagen ID.4 and the Ford Mustang Mach-E but also the Hyundai Ioniq 5 and the EV6. To quote the great Bette Davis, “Fasten your seatbelts - it’s going to be a bumpy ride!” 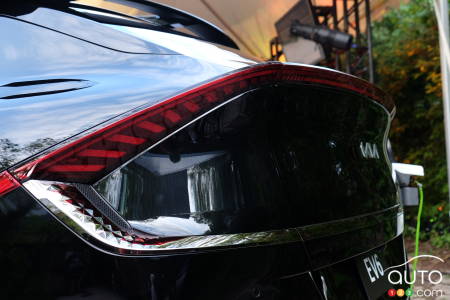 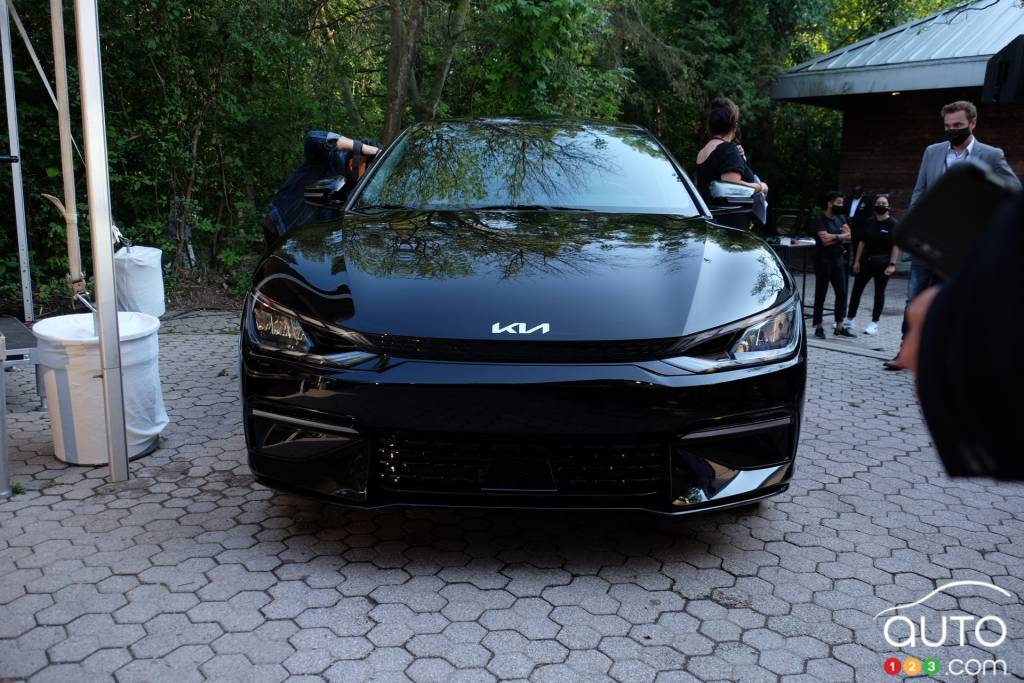 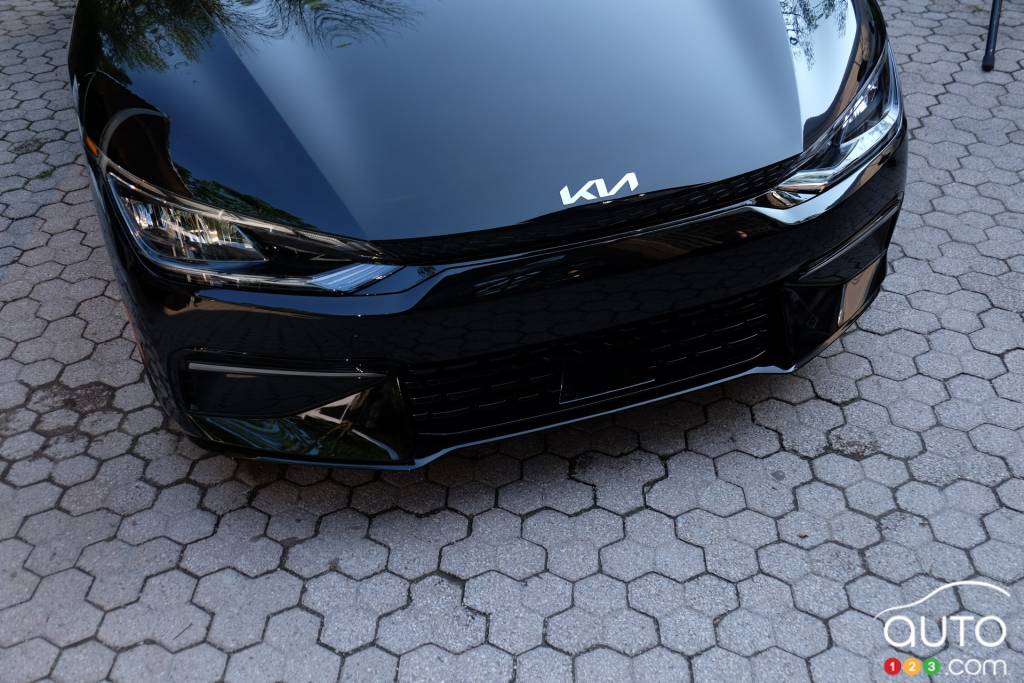 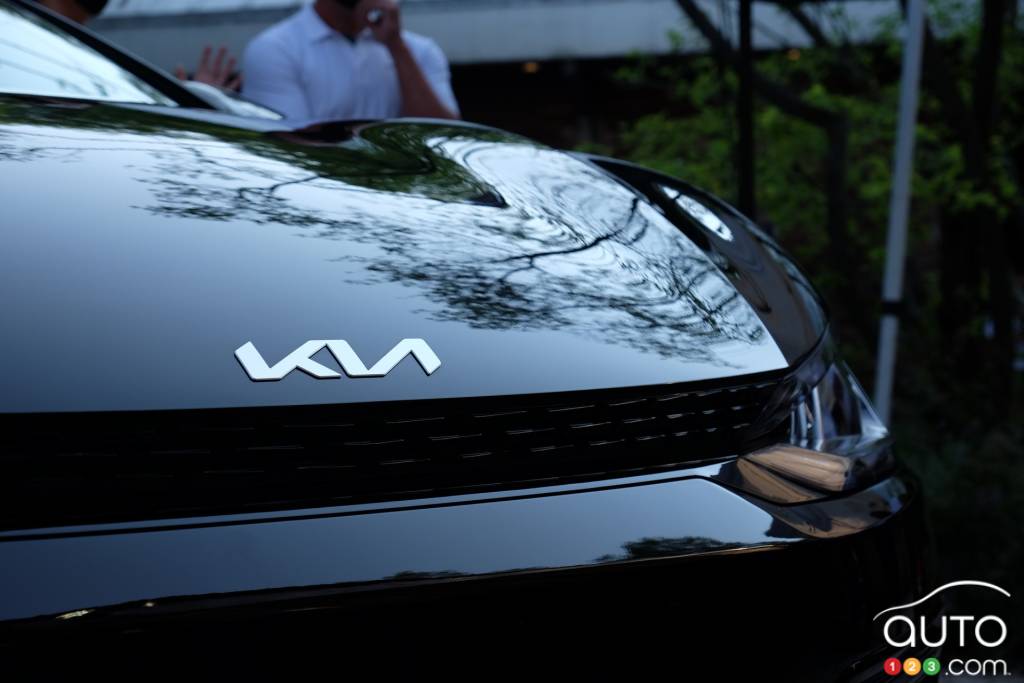 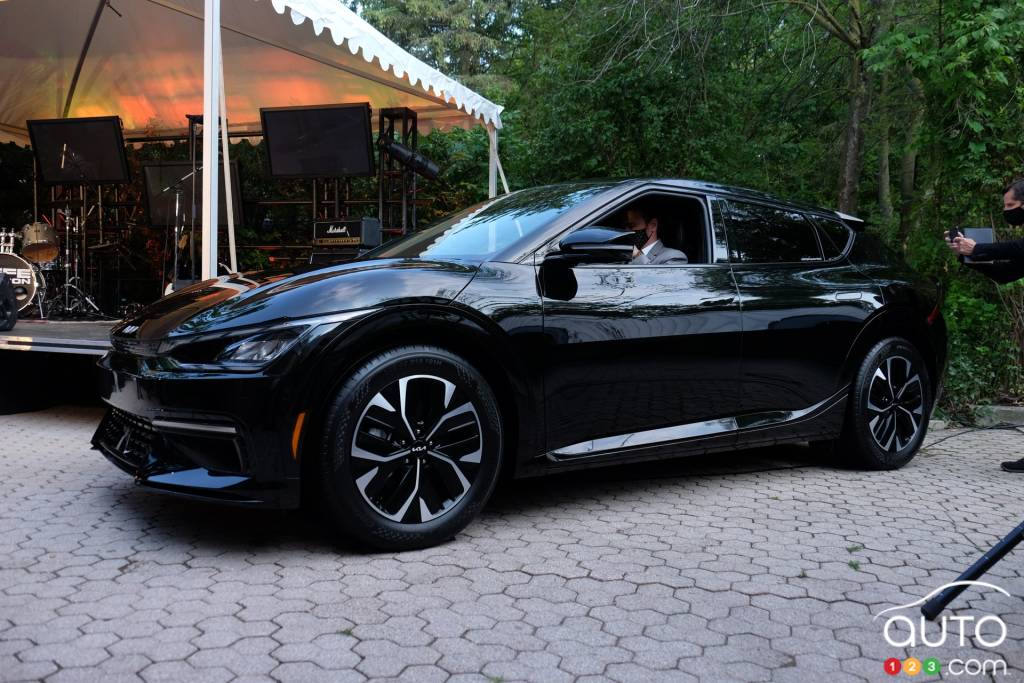 Kia has shared more details about its EV6 electric car. Notably, there will be several variants in the product offering, including rear-wheel drive and all-w...

Mazda Canada has announced trim details and pricing for its new MX-30. The company's first all-electric vehicle is set to debut here this fall.

Articles By
Derek Boshouwers
Canada One of the Easiest Countries in Which ...
Article
Refreshed 2022 Ford Expedition Packs More Tec...
Article
Cadillac Taking Orders for Lyriq EV As of Now
Article
More from this author