Kia has big plans for electrification, and it's not just the passenger-vehicle sector that's on the Korean manufacturer's radar. It also has ambitions in the commercial delivery vehicle sector as well, and to highlight its plans, the Korean automaker has just shared a couple of images featuring models that it hopes will make it an industry leader in electrified commercial transportation.

The models tie in with a vehicle unveiled last month for the South Korean market. The Niro Plus is a larger, stretched version of the small SUV we know, and it will serve there as a specialized vehicle for taxi and ride-sharing companies.

The models depicted on the new images should see the light of day starting in 2025, once the dedicated specialty vehicle plant is completed at Kia's Hwaseong production site in South Korea; the future commercial EVs will be assembled there. 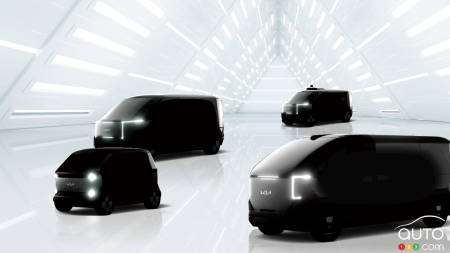 The first of those EVs, codenamed SW for now, will be based on the company's new eS evolutionary platform. It could well be the mid-size model seen in the photo, the one with the headlights shaped like the letter L.

After that, Kia plans to launch a self-driving micro model, as well as larger shuttles and vehicles that can be turned into offices or workshops. The images also show a boxy van, as well as a larger van with headlights featuring a signature that looks like the letter C.

Kia says the plant will initially be capable of producing 100,000 vehicles per year, with the possibility of increasing capacity to 150,000 units.

It isn’t known at this point whether any of these future Kia EVs will make it to North America. While it would be interesting to see how delivery companies here respond to Kia’s coming products, we'll have to see what decisions Kia makes regarding commercialization.