To mark its 80th birthday in 2019, Lincoln produced 80 units of a suicide-door-equipped version of its Continental sedan. The Coach Door edition was an ideal way for the company to pay tribute to its past, which has included Continentals featuring the format.

The special version also had a longer wheelbase in order to further maximize passenger comfort, for example by allowing for a retractable table for the back row that opens up from the central console. The interior featured premium materials throughout, most of them on the same level as those found in the top-end version of the Continental, the Black Label.

The 80 units produced sold out in just two days, which speaks pretty clearly to how popular the version was. When you consider then that the regular Continental has not sold according to expectations, the performance of the Coach Door edition was all the more notable.

Notable yes, but surprising? Not really. The Lincoln Continental sedan is its share of qualities, but without those suicide doors, it’s only one of many similar types of luxury sedans on the market. The doors make it unique, simply. 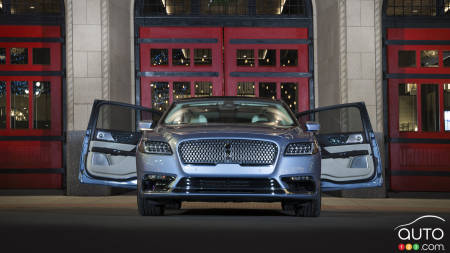 And that explains why buyers were willing to fork over the extra $40,000 USD it took to get the special edition. In this case, originality and status made the $115,470 total asking price worth it.

It also makes it easy to understand Lincoln’s decision to bring the Coach Door edition back for 2020, and to boost production to 150 units. In our view, that’s still not enough; in fact, Lincoln could use the version to ensure the survival of the model. In any event, for now, the decision means those who missed out on their special Continental last time around will get another chance.

The new Coach Door edition can be ordered until the end of the month of October; first deliveries are expected in the spring of 2020.

The 80 units of the new Continental with suicide doors that Lincoln is producing to mark its 80th anniversary have all been snapped – at $110,000 USD per uni...