Vehicle recalls are a common occurrence in the industry, and with the abundance of technologies and electric now found in vehicles, it’s a reality vehicle owners will have to live with.

This week, Mazda issued a pair of recalls covering two different models, the 2018 CX-9 and the 2019 Mazda3. The first affects 8,300 units, 420 of which are found in Canada. The second targets 38,000 of current-year Mazda3s, but we don’t know yet if any models in Canada are included in the recall.

The problem affecting the CX-9 SUV is an electrical nature. Problems with cables can lead to several of the vehicle’s systems to disengage, for example the turn signals, passenger-side airbag and starter. Mazda says that the instrument could also flash erroneous warning messages.

The company first got reports concerning the issue back in February, after which it undertook an investigation to determine its cause. That was found to be weak connector terminals in the cable system.

No accidents or injuries were reported in connection with the issue. The recall campaign takes effect on July 29th in the U.S. 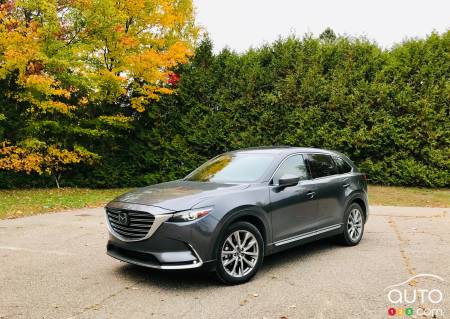 As for the Mazda3, the problem is more serious, in that it can lead to the vehicle losing a wheel. The cause is a simple one: lug nuts that are too loose. Mazda first received reports of the problem from outside the United States in April, and other cases have been reported in Mexico as well as in Japan, notably at the assembly plant.

The defect that leads to the lug nuts loosening has been identified, and the supplier has since adjusted the manufacturing process accordingly.

The good news for owners of vehicles affected by the issue is that a noise coming from the wheel will alert them of an issue long before the wheel might actually come off.

Mazda says that, here too, no incidents concerning the loss of a wheel, accidents or injuries have been reported. The recall campaign takes effect on August 6th in the U.S.

As mentioned, for the recall affecting 2019 Mazda3 models, it is not known at this point if any models in Canada are affected by the issue.

Mazda is recalling more than 121,000 vehicles, including over 20,000 in Canada, over a fuel-pump problem that could cause the engine to idle rough or even st...

Mazda is recalling around 36,000 2019-2020 Mazda3 cars. A potential issue with the automatic emergency braking system means it could detect a non-existent ob...

Subaru is recalling around 165,000 vehicles due to a fuel pump problem. In Canada, 12,601 vehicles are affected by the campaign, which targets a number of th...