Since it was fully overhauled for the 2019 year, the Mazda3 has earned itself a few recalls already. Now Mazda has added another one to the list, the company asking 35,390 owners of 2019-2020 Mazda3 cars to visit the dealership. Both sedan and hatchback models are targeted by the recall.

The problem has to do with the automatic emergency braking system some versions of the model are equipped with.

According to Mazda, the system could cause the vehicles affected to “unexpectedly stop while driving due to inadvertent activation of the Smart Braking System automatic emergency braking system.” The source of the issue is the software within that system, which could detect an object in front the vehicle when there is none and activate the system without reason.

This, clearly, is the type of situation that could prove quite dangerous to drivers and their occupants, not to mention those in vehicles behind or anyone else that could suffer the consequences of a sudden, unexpected stop. Fortunately, for the moment, Mazda is not aware of any injuries or deaths attributable to the problem.

For those who own a Mazda3 equipped with the Smart Braking System automatic emergency braking system and have never seen the system go into action, the company explains that an alert will appear on the dashboard or on the head-up display just before the system activates the braking manoeuvre. 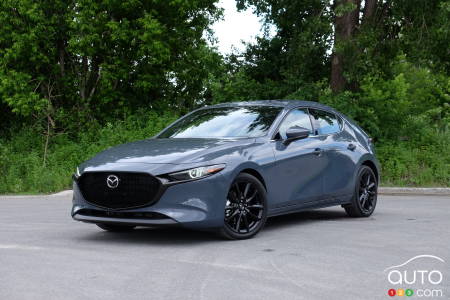 Mazda also specified that it has notified the NHTSA (National Highway Traffic Safety Administration) of the problem, but that there is for the moment no message posted on the latter organization’s website.

The repair is simpler to carry out in some models than in others, apparently. Older vehicles might need to have their whole instrument cluster be replaced and reprogrammed, because they include a different mechanism for manually deactivating the automatic emergency braking system. The company’s will also need to issue a new owner’s manual to those who own the affected vehicles that reflects the changes made to the system.

Meanwhile, versions of the Mazda3 built more recently will need only have their software updated.

Mazda says it hopes to have contacted all owners of affected vehicles by February 17. We have contacted Mazda Canada to find out how many vehicles are affected north of the border, and will update this story as soon as we have more information.

As it happens, we are driving the new Mazda3 for the holiday period; needless to say, we’ll be watching the performance of the braking system closely…

Mazda has announced two recalls this week, at least one of which impacts vehicles in Canada. The one involves 420 units of the CX-9 SUV. The other recall is ...

Honda is recalling over 761,000 vehicles due to a potential problem with the fuel pump. This new recall comes after a campaign launched last year over a simi...