Mercedes-Benz’s foray into the world of midsize pickup trucks has been a short one. The German luxury automaker confirmed that it will cease production of its X-Class, introduced just two years ago, this coming May. The model is based on Nissan’s Navara pickup and in fact is built at the Japanese company’s plant in Barcelona, Spain.

Could bringing the X-Class to the North American market have helped it survive? It's unlikely, but in any case it’s a moot point now.

A company representative confirmed the news during an interview with the Auto Motor und Sport website. The representative added that the X-Class is a niche product, but that it had made inroads only in certain markets like Australia and South Africa. Mercedes-Benz says it regularly evaluates its global lineup to see which models should stay and which should go. It decided to drop the X-Class despite the fact that it is a "relatively young" product. 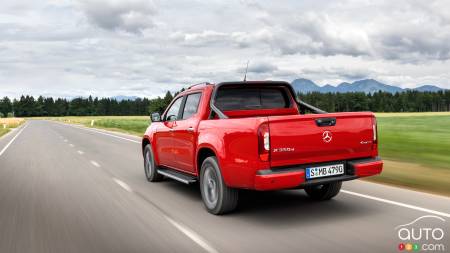 The original plan was to build the truck in Argentina for South American markets, but Daimler changed course in February 2019, saying that "the price expectations of Latin American customers were not economically viable for us”. In other words, the X-Class, which also shares many features with the Renault Alaskan, was simply too expensive compared to its mass-market twins the Alaskan and the Navara.

A look at the starting prices of the three models in Germany is instructive. Mercedes-Benz’ pickup starts at 48,790 Euros - 16,000 euros more than Nissan's Navara and close to 4,000 Euros more expensive than Renault's truck. It should be noted that for the next few months, only the V6 diesel model is still available - the 4-cylinder X250d and X220d are no longer offered on the German site.

The irony is that we may well be looking at a future collector's item, due to the limited production run of the model.

The Mercedes-Benz X-Class might not be long for this world. The premium pickup has been dogged by reliability issues and sluggish sales, and its cause is bei...

Auto123 reviews the 2020 Mercedes-Benz GLS 450 luxury SUV, the name of which in Mercedes-speak designates it as the S-Class of the brand’s SUV lineup.