Mercedes-Benz introduced its foray into the pickup category with great fanfare two years back. The X-Class, sold in overseas markets, is in fact a reworked version of the Nissan Navara, also sold outside of North America.

Initial response to the X-Class was positive overall, and some in North America were lamenting that the German automaker had chosen not to market it new product in the top market for light-duty trucks. Rumours began circulating of the possibility there might be other variants, including one with a V8 engine as well as an extended-wheelbase version.

That talk has now subsided, in fact a new report by the Automotive News suggests that the model’s very survival might be in doubt due to weak demand.

In 2018, sales of the model in Europe, Australia and South Africa totaled 16,700 units, well below the projections of its manufacturer. Add to that the reality that Mercedes-Benz is in cost-reduction mode in the hopes of boosting profits, and you have a perfect storm that may end up sinking the X-Class. 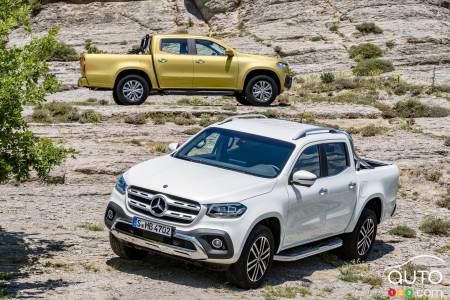 That’s before you factor in the uncertainties surrounding the current partnership between Mercedes-Benz and the Renault-Nissan alliance.

Secondly, several recalls have been issued on the model and tainted it in the eyes of consumers in terms of reliability. One of these recalls was in response to a light located at foot level in the cabin, which could detach and potentially block the brake pedal. Not the kind of problem that inspires confidence…

No decision has been made by Mercedes-Benz regarding the future of the X-Class, and it could still be spared the guillotine. But the experience serves has more proof that some market segments are not automatically accessible to all manufacturers.

We Hardly Knew You: The Mercedes-Benz X-Class Disappearin...

The Mercedes-Benz pickup truck that first appeared on global markets in December 2017 is already going away; it will cease production in May 2020. With sales...

Mercedes-Benz has made a number of revisions for its sixth-generation new 2022 C-Class, but the most notable change can be found under the hood. There buyers...

Make no mistake, the 2021 Mercedes-Benz A35 AMG Hatch, a reasonably priced (for something with a Silver Star on it) little car, is a luxury Mercedes through ...