A few days ago, Mercedes-Benz unveiled its plans for electrification. We learned, among other things, that an electric G-Class is planned for 2024, and that the automaker’s entire lineup will be all-electric by 2030.

We can therefore expect an accelerated pace of electric-model presentations over the next few months and years, including at auto shows. The upcoming show in Munich will host the public the debut of another new electric model from the brand. The EQE is essentially the combustion engine-free version of the E-Class.

From the two teaser images released this week, we can see that the styling will feature short overhangs, a long wheelbase and a more aerodynamic design that will break with tradition somewhat. The front end is still unknown at this time, but we can make out an arched roofline that flows into a short rear end with LED lights. 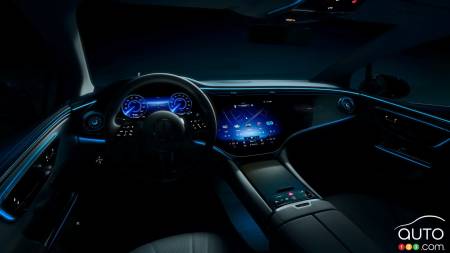 Inside, the EQE will carry over the styling from the EQS. In particular, it will be available with the configuration that turns the entire dashboard into a screen, which inside the EQS measures 56 inches.

Mechanically, the EQE could take on the two-motor powertrain seen in the EQC SUV. In that model the unit offers an output of 402 hp and 561 lb-ft of torque. Other options could join the lineup later, including an AMG variant.

Maybach will also be prominently present in Munich, with a study being presented that previews the future direction this ultra-luxury brand could take.

In total, the Mercedes-Benz Group (which includes AMG, Maybach and Smart) will unveil eight vehicles at the Munich show, including five all-electrics and one hybrid. The latter will probably be the GT 73e, which will offer more than 800 hp. The armored version of the latest S-Class, as well as the C-Class All-Terrain will also be presented.

The 2021 Munich Motor Show (which replaces Frankfurt on the calendar) opens its doors for media day on September 6.