Super Cruise semi-autonomous driving technology was introduced at Cadillac a few years ago and is about to be fitted to several of the brand's vehicles, as well as to other models across the GM lineup. However, the global microchip shortage is putting a damper on the expansion of the system's availability.

Indeed, the GM Authority website reports that Cadillac does not have sufficient supply of chips to be able to deliver its 2022 Escalade model with the Super Cruise system.

For those unfamiliar with Super Cruise, it's basically adaptive cruise control, but which can take control of the vehicle on certain stretches of highway. The system recognizes some 200,000 miles of highway in the U.S. and Canada and can operate on them without human intervention help, as long as the driver keeps their eyes on the road.

It is quite possible that the system will return to the vehicle during production of the 2022 models, but for now, buyers will have to do without it. It's not clear at this point when the feature will be available for order again. It's also likely that it can be installed later. 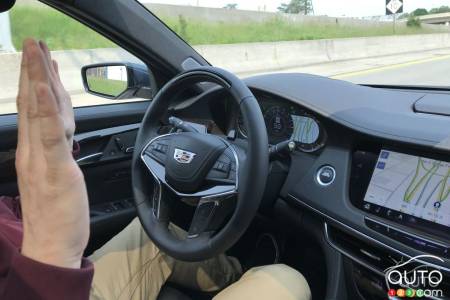 Beyond how it affects the Cadillac Escalade in particular, this move reflects the seriousness of the crisis as it affects virtually all manufacturers. Not only is it causing a shortage of new vehicles and an increase in the price of used models, the crisis is affecting the equipment of some of the vehicles that are delivered.

By the way, this is not the first time GM has been forced to eliminate features for lack of available of semiconductors. Already, rather than pause production altogether, the company chose to build 5.3L V8 versions of its Silverado pickup without active fuel management technology, for example. Customers got their trucks, but with reduced fuel efficiency.

Experts estimate that it will take until 2023 to see a return to normal, although they also expect the situation to gradually start to improve in 2022.

Deliveries of Cadillac Lyriq EV Will Begin Within a Few M...

GM President Mark Reuss said this week that first deliveries of the Cadillac Lyriq will happen within the next few months. The all-electric SUV’s debut, if a...