Later today, the long wait for the new mid-engine Chevrolet Corvette comes to an end with the unveiling of the 8th-generation model. The new Corvette marks an important transformation for the model that will now carry its engine midships.

Our intrepid Auto123 colleague is on hand for the big reveal and you’ll be able to check out his report on the newest incarnation of the legendary model in the coming days.

I myself was able to see some photos of the new Corvette a few weeks ago, thanks to another colleague. Obvious from looking at those images is that the new C8 generation will force fans to alter their perception of the model. It is spectacular, of that there’s no doubt, but it no longer bears much resemblance to the Corvette of our imaginations.

Before the curtain is raised officially, however, there are persistent rumours that continue to float about regarding a possible close cousin over at Cadillac. That might sound strange and unlikely, but several elements lend credence to the idea.

To begin with, the image of a fob began to float around the internet last fall. A Cadillac fob, clearly showing the icons of a mid-engine car (one of a trunk opening in front and one of a hood opening in back). When questioned about the meaning of that during the launch of the CT4-V and CT5-V models, GM president MMark Reuss had a succinct answer: “We’ll see.” 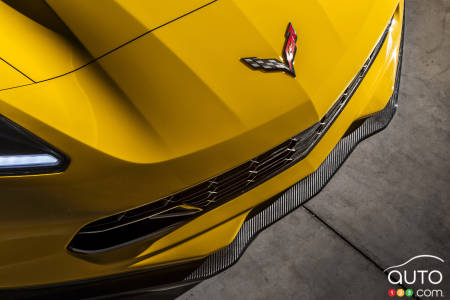 Last week, the executive took pains to specify that noon had actually placed Cadillac’s 4.2L Blackwing V8 inside the new Corvette. On the surface this seemed to put the kibosh on the idea of a Cadillac version of the Corvette, but of course in this day and age that does not preclude a design having been created using software.

The relevance of this particular engine is that it is currently built at the same plant in Bowling Green, Kentucky where the Chevrolet Corvette is assembled. And up to now, Cadillac has not found widespread use for the engine, other than in the CT6-V and perhaps the CT5-V - both fairly small-volume models. Why then go to all that trouble and expense to develop the engine?

For Cadillac, such a model certainly wouldn’t do anything to harm its image. The R8 certainly helped burnish Audi’s brand image.

We don’t necessarily expect any major revelations regarding this Cadillac-Corvette connection at the new model’s launch today. But once the Corvette is launched, it might not be long before we got some official word.