Ever heard of the little town of Moab? It’s located in the south of the western American state of Utah. Nestled comfortably in a valley near the legendary Colorado River, Moab was first made famous at the turn of the 20th century when uranium was discovered in the area.

The golden age of Moab as a mining hub would not last long, however, as the precious metal soon lost much of it value. Fortunately for the town, the desert surrounding the town came to be renowned among outdoors enthusiasts who flocked there to hike, cycle off-road, camp in the back-country and, especially, do some off-roading at the wheel of all-terrain vehicles. These of course included Jeeps; the brand had in the early-1950s just finished its military service as the army’s go-to vehicle.

The small four-wheel-drive utility vehicle was rapidly adopted by off-roaders. Over time, a whole network of paths and trails was developed that allowed enthusiasts to explore the desert and admire its unique mountains, buttes and canyons of reddish stone.

Fast-forward to today: the little town and its 5,000 inhabitants welcome, year after year, thousands of visitors, most of whom are in search of some kind of outdoors adventure. And many of them are at the wheel of a Jeep, often one that’s been modified. Some of the trails they attack are supremely challenging.

So it is that the FCA Group’s Jeep division makes frequent use of the network of trails to test out many of its models – among them the all-new Jeep Gladiator just unveiled in Los Angeles. Jeep even used the Moab name for some trims of its models like the Wrangler. 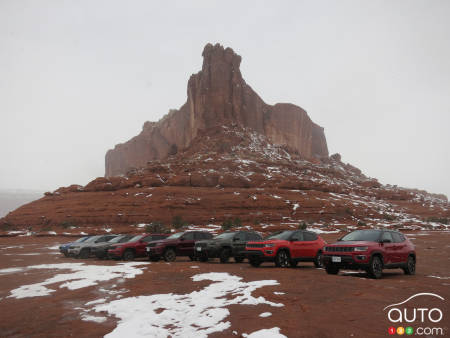 That said, the brass at FCA Canada felt it was important that everyone know there’s more to the Jeep lineup than the ubiquitous Wrangler. The Renegade, Compass, Cherokee and Grand Cherokee are all produced in more-rugged off-road-focused Trailhawk versions, and yet often these editions struggle to get out the imposing shadow of the Wrangler.

Hence a special event the manufacturer organized to put the spotlight on its Trailhawk editions, which included a special excursion on one of Moab’s trails, called the Seven Mile Rim. The challenging route leads to the famed Merrimac and Monitor plateaus that rise above the surrounding desert.

FCA Canada invited a small group of journalists specialized in the domain to witness the prowess and durability of its Jeep Trailhawks in conditions verging on extreme. Brought in for the event were two Trailhawk units of each model, with the exception of the little Renegade. Our playthings for the day were the Grand Cherokee Trailhawk (V6 and V8), Cherokee Trailhawk (V6) and Compass Trailhawk (2.4L 4-cylinder).

Each model we drove was also Trail Rated, which means they have suspensions specially adapted for rough-and-tumble off-road excursions.

Now, the three models are issued from different classes (the Compass is a compact SUV, the Cherokee is a midsize and the Grand Cherokee is a full-size), but each one was going to attack the same trail and the same obstacles. 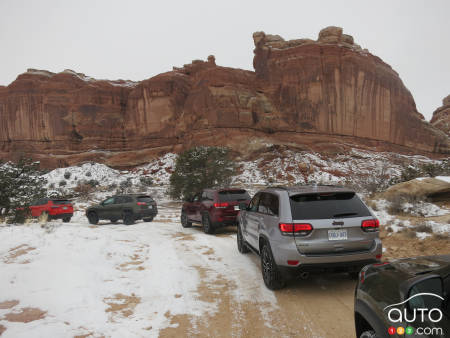 As it happened, our trek started with a thin layer of snow on the ground, and this provided even sharper detail to the surrounding desert landscape. It also made life just a bit more difficult for the participants, as the vehicle were fitted with their factory tires (Goodyear Wrangler AT for the Grand Cherokee, Firestone Destination A/T for the Cherokee and Falken Wild Peak H/T for the Compass.

No matter. Save for a few instances where drivers had to attempt climbing manoeuvres a few times before getting it right, none of the Jeeps got stuck to the point of needing rescue by the team of local specialists on hand for the event.

Jeep Grand Cherokee Trailhawk
As we expected, the model most at home in this challenging environment was the Grand Cherokee, whether it was running with the 3.6L Pentastar V6 or the bigger 5.7L HEMI V8 (note: the EcoDiesel V6 is expected to rejoin the lineup in the near-future).

Its Wrangler-like “north-south” mechanical disposition gives it capabilities approaching those of the legendary model, and a similar silhouette that harkens back to the military Jeeps of the 40s. Its electronic transfer case is unique in that drivers can choose the setting they want to better attack rocky, sandy or snowy terrain, or else to ford a brook or small river (it has a ground clearance of 218 mm).

Equipped with the adjustable air suspension, it can even be raised to give it 264 mm (or 10 inches) of ground clearance. Then, the option of using a low gear allows the driver to use higher engine RPM for more power when climbing, or to brake using the engine when coming down a steep slope.

Though it’s bigger and heavier than the other two Jeeps, the Grand Cherokee is still nimble enough to squeeze through the same tight spots as them. The skid plates fitted on all Trailhawk models allows it to manoeuvre as confidently as the specialized Wranglers. 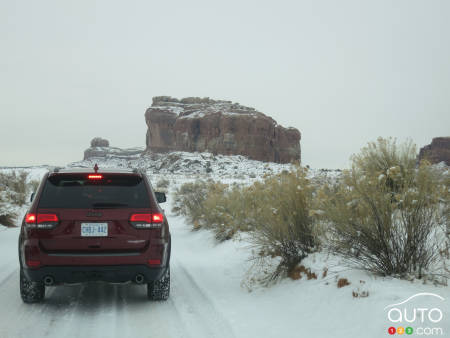 The two Cherokee Trailhawks we used on the excursion were revised 2019 editions featuring restyled front ends, highlighted by new headlights that now sit higher up than before. Out of the factory the Cherokee Trailhawk comes with a 271-hp 3.2L Pentastar V6, but the versions we drove ran on a new MutliAir 4-cylinder turbo engine (270 hp, 295 lb-ft of torque) developed in partnership with Fiat.

The only transmission available in this Jeep is a 9-speed automatic. By default the midsize SUV runs in front-wheel-drive configuration, but the driver can switch it into AWD mode when desired, or the vehicle will do it when the front wheels start to lose traction. The Active Drive Lock transfer case allows it to remain in low gear to attack more difficult terrain.

As in the Grand Cherokee, a rotating knob on the console allows the driver to switch to Auto, Sport, Snow, Sand, Mud and Rock mode (that last one is unique to the Trailhawk versions). Highly practical in an off-roading situation with steep descents is the Hill Descent function, which we put to liberal use.

By the way, the new 4-cylinder had no trouble following the beefier V6 and V8 of the Grand Cherokee, either one on the highway that took us to the trail-head or in the more difficult sections of the Seven Mile Rim. 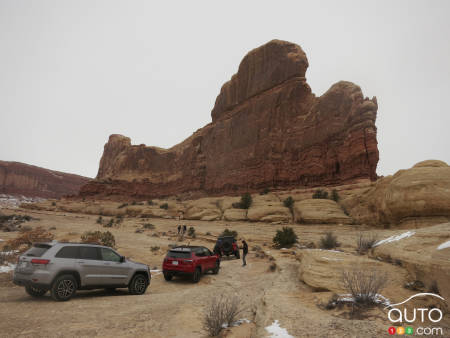 Jeep Compass Trailhawk
Completely overhauled two years ago the compact SUV is pretty far removed from the first-generation Compass. All of the mechanical elements have been modified, starting with the 2.4L 4-cylinder engine that isn’t the TigerShark unit of old but is a MultiAir version developed conjointly with Fiat. It has an output of 180 hp working with a 9-speed automatic transmission, and it delivers most of it power to the front wheels unless these start to lose traction. In that situation the electronic transfer case sends some power to the rear wheels to restore control.

Incidentally, the Compass Trailhawk used for our excursion was fitted with the Active Drive Low transfer case, which only has one gear but also has the Auto, Sport, Snow, Sand, Mud and Rock mode functions.

Its guts gave the small Compass all it needed to easily keep up with the bigger boys. The Compass Trailhawk probably won’t be the first choice of too many people seriously into off-roading, but it performed faultlessly on the Seven-Mile Rim, even with the extra challenge of the snow. The Hill Control Descent function allowed drivers to maintain the same pace as the others without abusing the brakes. On uphill sections it did require more fervent pressure on the accelerator, but the Compass got where it needed to go, even riding on those factory tires. 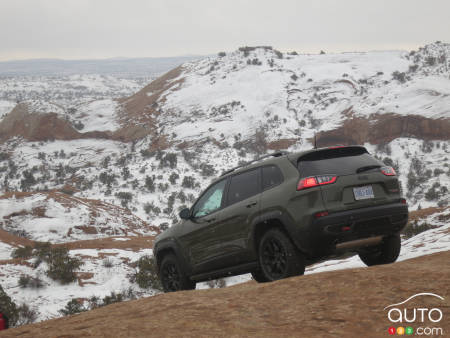 True all-terrain machines…
As mentioned, FCA Canada had called on the services of local specialists, who were on hand to direct things and be available in case anyone got stuck or had a spill (fortunately that didn’t happen).

The folks from Barlow Adventure were driving a Jeep Wrangler fitted with off-road tires that were notably more aggressive than ours. This allowed us to compare our more “all-purpose” Trailhawks with those highly specialized machines.

I should mention that the trails chosen for us by Barlow were less demanding than those used for the Rubicon event put on by Jeep in California last month (which involved the Wrangler Rubicon and modified editions – we were at that event as well and you can read about it here).

For those who want to explore places offering an intermediate level of difficulty like the wild back-country around Moab, any of the Trailhawk editions would be up to the task - no question. For the more extreme circuits like the Rubicon, you’ll have to turn to vehicles specially designed for that kind of activity. 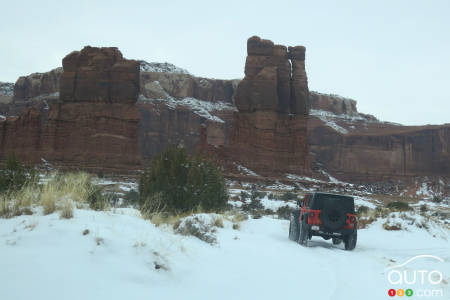 Last word regarding the tires: if you want to take full and safe advantage of our Canadian winter in a Jeep Grand Cherokee, Cherokee or Compass Trailhawk (or any other version for that matter), you should really consider getting appropriate winter tires. While the factory tires performed well during our Moab excursion, it’s best to put all the odds in your favour, is how we see it!

While Canadian pricing for 2019 hasn’t been announced yet, we can give you the 2018 prices:

Very capable and compact, the Jeep Cherokee is a solid alternative for those who love leaving the beaten path behind.