In 2020, Carmakers have no choice: they must have a green strategy, no matter how they might perceive things.  For the 77th edition of the Montreal International Auto Show, on now and until Sunday January 26, Honda's Canadian division decided to do things differently.

Indeed, the Honda booth located on the second floor of the Palais des Congrès has taken on an unusual shape. For one, several models from the lineup are conspicuously absent. Usually, space is tight at a stand packed with vehicles, though that allows visitors to the show to sit behind the wheel of the coveted vehicle.

This year, the stand is divided into several sections where visitors can discover different aspects of what defines Honda: its history, its involvement in the community (with local organizations), its expertise in crash testing or even some of the steps involved in assembling a Civic Si sedan.

It’s worth putting all of this into context. According to Environment and Climate Change Canada's most recent report on greenhouse gas emissions for 2017, Honda is the automaker with the lowest average overall fuel consumption in the industry, and it also emits less CO2 than the average internal combustion vehicle manufacturer.

According to Honda Canada's senior official, the same applies on the American side of the border, but the absence of a similar official report for the U.S. industry prevents Honda there from promoting its green stature to consumers there, at least for the time being.

Gardner went on to add this: "Being a green manufacturer should not be calculated on the number of electric vehicles, but on the impact that (the company) has on the environment”. Presumably, Honda is feeling stung by criticism over the lack of a purely electric model in its fleet.

Jean-Marc Leclerc, Senior Vice President of Sales and Marketing for Honda Canada, believes that electric vehicles are still expensive to purchase, even when the applicable government incentives are applied. He added that the public's impression (of electric vehicles) is that the energy needed to drive EVs is free right now, which is not quite the case.

In short, Honda wants to remind the Canadian public that despite the absence of a dedicated electric vehicle in its fleet, the manufacturer and everything it encompasses here in Canada is trying by all means to reduce its ecological footprint by encouraging its dealers to adopt a green plan, to reduce to zero the amount of waste coming out of the Alliston plant (since 2007), etc. The efforts extend to establishing its head office in a LEED Gold certified building.

Hence on Honda Canada's website, each 2020 model is displayed with an explanatory label explaining fuel consumption and the quantity of carbon dioxide emitted by that model, similar to what already exists in the food industry with information on sugar level, number of calories, etc. included on the packaging of many food products. 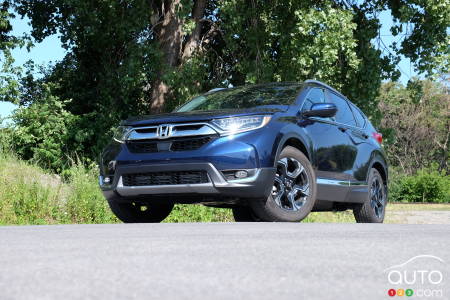 And the CR-V Hybrid in all this?
When asked about the lack of a hybrid variant of the CR-V, Jean-Marc Leclerc explained that the Ontario plant in Alliston, which currently assembles the CR-Vs sold in Canada, is not equipped to assemble the hybrid model. Honda's Canadian wing would thus have to call on the American plant to source the CR-V Hybrids.

The vice-president of marketing and sales reinforced his point by saying that doing this would affect production at the Alliston plant, considering that the hybrid version of the compact SUV would take away from Canadian CR-V sales.

Despite Toyota's aggressive strategy with its RAV4 Hybrid - and soon its RAV4 Prime plug-in hybrid - Honda Canada maintains that the business plan for marketing a CR-V Hybrid here is simply not profitable, especially with a price range that's somewhat set by the RAV4 Hybrid.

What's more, Dave Gardner also made a point of saying that the Canadian division doesn't need a vehicle like the CR-V Hybrid to meet environmental standards for the next three years (2020, 2021 and 2022).

All of that aside, we can expect a CR-V Hybrid to be made available here at some point, in the medium term (likely with the next generation of the model). Recall that Takahiro Hachigo, Honda's worldwide president and CEO, in 2016 promised a global fleet that would be two-thirds electrified by 2030. And given that over 60% of Canadian sales are made up of the CR-V and Civic, we can expect to add a hybrid version of one or both within a few years.

The future is mostly hybrid... in North America at least
In fact, the goal of electrifying the company’s global fleet raises a lot of questions about Honda Canada's intentions - and Honda USA's by default - regarding the strategy to be adopted for the electrification of its lineup.

Asked about what we can expect from the automaker over the next decade, Dave Gardner declined to commit to identifying which models would be electrified, but the clear upshot is that within a few seasons, the vast majority of Honda models in North America will be powered by a traditional hybrid engine, with the other solutions (plug-in hybrid, electric or fuel cell) constituting a much smaller part of the solution envisioned by 2030.

On this subject, the two leaders of Honda Canada are categorical about Honda's future: the manufacturer will continue its research on all other alternative energy solutions such as hydrogen and pure electrification.

Honda has announced a recall of 137,000 2019 CR-V SUVs in the U.S., Canada and South Korea due to a defective component in the driver’s side airbag. Metal bu...