The Nissan Armada we have in Canada has been on our market since 2004. In 2017 Nissan trumpeted a new generation of the model, but in fact it was serving us automotive leftovers. In global market the Armada is known as the Patrol, and that model always seems to be a step ahead in terms of updates of the Armada we get.

Step ahead, but only in relative terms: the Patrol was last renewed in 2010. The next year, Infiniti debuted its QX80, built on the same foundation. Which means that consumers here had to wait seven years before getting the “European” model of the Patrol/Armada, in the guise of the QX80.

It’s clear the Patrol is starting to seriously age, despite the updates it has received over years to its visual presentation, the technologies it harbours and the equipment it features. The last styling tweak it received was just last September.

Now, the website CarSales reports that Nissan has confirmed that on the design team’s to-do list is a renewed Patrol/Armada, among a number of others models that form the core of the automaker’s lineup. The confirmation came courtesy the company’s head of design, Alfonso Albaisa, who pointed out that the Patrol is one of the brand’s oldest nameplates around the world. 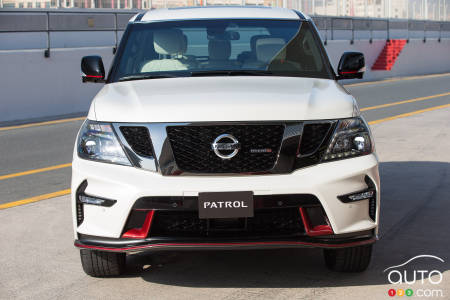 No date was given as to when the renewed SUV is to make its debut, but since it did get a mild revision last September, logic would dictate an overhaul in three years, by 2023 in other words. If we go by the company’s usual m.o., the QX80 will follow next year.

Hopefully it won’t take until 2030 to being the new generation to North America.

There are no guarantees either way, because the one certainty with the automotive industry is that it will be drastically different 10 years from now. That said, demand for vehicles in the Armada’s size category, with their substantial towing capacities, will never disappear. You don’t need to look further than that to understand why the Armada will continue on – even if it’s only under the Patrol name.

Nissan gives the largest SUV in its lineup a significant beauty makeover. The 2021 Nissan Armada offers a more muscular style, but above all, its interior ge...

Nissan Juke-R hits the road... and the gaming scene!

Given the success of the Juke-R concept unveiled in Dubai last January, Nissan decided to go ahead with a very limited production run. The first unit is now ...

Do size, ruggedness, strength and toughness matter to you in a family SUV? Do you need a model that can actually work, go off-road, and tow a big trailer? Lo...