While the Nissan Qashqai has been among us in North America for three years now, the model has in fact been present on the European market for much longer than that. Also in fact, the model is due for a major overhaul, and gradually word is starting to spread regarding what that overhaul will involve.

This is all still speculation, mind you, especially as it concerns the North American market  – even though we have some hints already. The following applies, for now, to the model that will be offered in global markets.

Speaking with Auto Express magazine, Nissan Europe’s VP for product planning, Ponz Pandikuthira, said that the next Qashqai that will debut in Europe next year will be similar in size to the current model. The design will be different, of course, but so will the structure it’s built on. Nissan will give it an updated version of the CMF platform widely in use across the Renault-Nissan-Mitsubishi Alliance’s range of products.

However, rather than opt for an electric powertrain, Nissan is looking at two different hybrid systems that it could use. The first is the company’s famous ePower system that uses a combustion engine to generate an electric-based propulsion system. The other is the plug-in hybrid system currently in use in Mitsubishi’s Outlander PHEV.

Nissan has not yet decided which way it wants to go. We know that the ePower system is in the Japan-only Note model and has proven successful, but the caveat is that the lower speed limits (around 100 km/h) in that country make it the perfect environment for ePower. While Ponz Pandikuthira’s team is looking at using the technology in Europe, speed limits there often are set at 120 or even 130 km/h. In that context battery power is used up more quickly, making the ePower system less effective; the engine has to work harder to maintain energy and fuel economy diminishes considerably.

As for the plug-in hybrid system, the executive cast doubt on it as a solution. In his view that technology is best seen as a temporary solution, which could well become obsolete within four or five years when the cost of battery systems will have fallen enough to make EVs more profitable to produce.

"We’re not pursuing a big plug-in hybrid strategy. On some car lines we’ll try it out, but the business case for plug-in hybrids is not very good."

Ironically, the Mitsubishi Outlander PHEV is currently the best-selling plug-in hybrid SUV in the world. The manufacturer might not be so hot on the technology, but consumers are asking for it. Evidently they see in it a product that offers the advantages of electricity but without the range anxiety that comes with all-electric systems.

We’ll have to wait and see what approach Nissaan ultimately chooses for its Qashqai in Europe, and then, what version we’ll get here in North America – and when.

As for those hints we mentioned, let’s just say that ePower technology has regularly come up in discussions that we’ve had with the folks at Nissan… 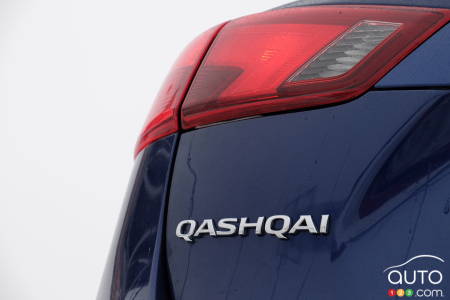 Nissan has introduced the next-generation 2022 Qashqai for Europe. The model will make its debut there this summer, with its launch here likely coming either...

Nissan Gives a Preview of the Next Qashqai

Nissan released a first teaser video ahead of the February 18 presentation of its revised Qashqai subcompact SUV. The version previewed is the one destined f...