Nissan is to recall more than 180,000 Frontier and Titan pickups due to a transmission-related issue. Of the total, 5,259 Frontier and 718 Titan trucks are located in Canada.

The company says the parking pawl, which is the part that keeps a vehicle from moving when the transmission is in the Park position, may not engage.

“Due to dimensional variation during the manufacturing process, reduced clearance may cause contact between the edge of the parking pawl and the boss on the transmission case, which may result in non-engagement of the parking pawl.”

As a result, the vehicle could roll away if it is not parked on a level surface, even if the gear selector is in the Park position. At the time of writing, Nissan is working on a solution and recommends that owners use the parking brake until the issue is resolved.

It should be noted that the recall only affects models equipped with a 9-speed automatic transmission. Specifically, we're talking about Frontiers that were assembled between June 10, 2020 and June 25, 2021, as well as between July 13, 2021 and June 14, 2022. 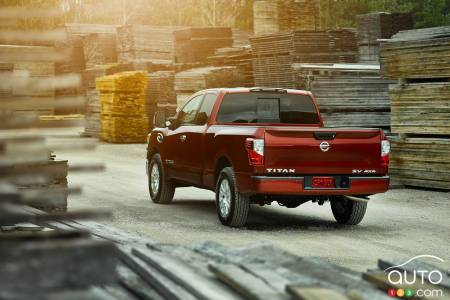 In Canada, this should only affect the new-generation models. In the U.S., the previous-generation Frontier did receive the new engine and transmission that were introduced with the new model.

Nissan told the National Highway Traffic Safety Administration (NHTSA), the equivalent of Transport Canada, that it is aware of four injuries related to the defect and is urging owners of the Frontier and Titan affected by the recall to use their parking brake.

Engineers are working to resolve the issue. Nissan will notify owners of affected vehicles by mail beginning July 20, 2022. They will be asked to bring their vehicle to the service centre to make the repair - once a fix has been settled on.

Nissan has in place a stop-sale and no-delivery order on the new 2023 Nissan Z with auto transmission over a rollaway issue. A company spokesperson confirmed...

Articles By
Daniel Rufiange
The Polestar 3 Shows its Backside Ahead of Oc...
Article
Lamborghini Has Built its Last Aventador
Article
There’s Renewed Speculation Ram Could Bring B...
Article
More from this author