The Z and GT-R are to Nissan what the Camaro and Corvette are to Chevrolet, what the Boxster and 911 are to Porsche - iconic models, products that characterize the brand and define its DNA.

The idea of seeing them go electric does not please everyone. However, it seems inevitable and the company confirmed to Top Gear magazine that there will be a major change at some point and that both cars will eventually shed their combustion engines.

That's not going to happen anytime soon, though, because Nissan says it is simply not technologically ready to make the transition yet. Meaning that, with current technology, Nissan feels it can’t yet replicate the DNA of those models with electrification.

“At present, when we do all the simulations to the electrification on these cars, we don't find the right technology to define what is 'Z' and what is 'GT-R'. And at the end, these two are not cars, these are our culture.”

Meanwhile, on May 16, you'll have the opportunity to reconnect with that culture, as our Auto123 contributor Vincent Aubé will deliver his driving impressions of the new Z that he just test-drove in the Las Vegas area. As for the GT-R, we're still waiting for its renewal, which was last redesigned for 2008.

In regards to a future electric GT-R, Gupta said that “it's too early to say when, but definitely it will come one day.” He went on to describe the Z and GT-R as the beauty and the beast respectively, mentioning that the two play different roles in the automaker's lineup. He also said that their positioning would not change.

We'll see about the renewal of the GT-R, which is more than due, but at least fans will be able to turn to the Z later this year. 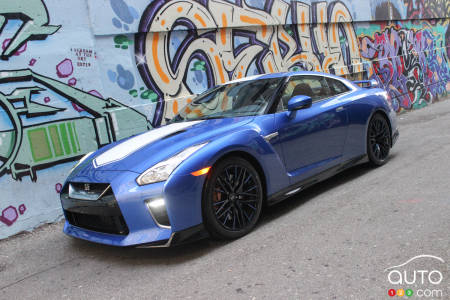 Nissan is said to be looking to put electric powertrains in the next-generation GT-R and 370Z sports models. The company wants 40% of its European sales to c...