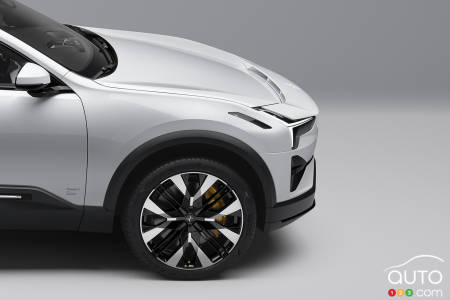 The world premiere of the Polestar electric brand’s first SUV is set for this October, the fledgling automaker confirmed today. And to celebrate that announcement, it shared a single first image of the Polestar 3 to get us all talking.

The shape of the SUV is instantly recognizable if you follow EV news and know of the new crop of electric crossovers hitting the market, for example Kia’s EV6 and Volvo’s new C40. Which tells us that while automakers make much of the freedom EVs represent for designers and stylists, the questions of ergonomics and range optimization do impose some constraints.

To that end, we see twin ducts running front to back on the hood, and a spoiler on the top of the tailgate.

Other notable features include a large panoramic roof, slim headlights and bulging rear lights. As with a number of other recent EVs, the door handles recess into the door panels. 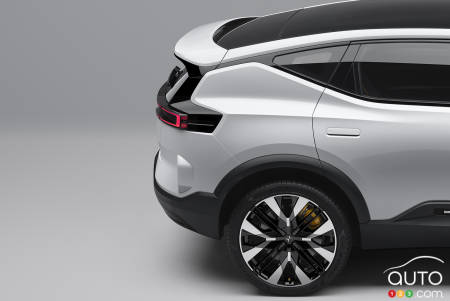 Here’s what Polestar is saying as of now regarding the coming EV, aside from its shape and styling:

- The Polestar 3 is taking aim at the potentially lucrative U.S. market;
- It will feature a dual-motor powertrain and large battery;
- The company hopes to come in with a range approaching 600 km (though that’s via the more-lenient European WLTP testing cycle; expect something less for North America);
- The vehicle will be assembled in the United States as well as in China;
- Polestar will start taking orders for the model the day of the premiere.

Explained Polestar CEO Thomas Ingenlath, “Polestar 3 is the SUV for the electric age. Our design identity evolves with this high-end large luxury EV, with a strong, individual brand character. With this car, we bring the ‘sport’ back to the SUV, staying true to our performance roots.”

Polestar also revealed it plans to launch a new model per year for the next three years, and expand its presence to 30 global markets by the end of 2023 to help sell those new products. It has set a target of increasing its sales 10-fold from the 2021 tally of 29,000 by the end of 2025.