Some fifty years after its introduction, Porsche has decided to dust off and resurrect the 1968 911 T, or more precisely the concept behind that model. The new Porsche 911 Carrera T (the T is for Touring) is in essence a more-lightweight version of the 911, with shorter gear ratios and a locking rear differential.

Around 20 kg were shed off the car for the new 911, mainly by using lighter glass for the side and rear windows, replacing the door handles with straps, reducing sound insulation and removing the rear seats. Buyers can also opt to forego the communication management system (PCM).

Exclusive equipment
At the same time, Porsche equipped the 911 Carrera T with a number of features not available with the regular 911 Carrera, like the standard PASM sports chassis that sits 20mm lower to the ground, lightened Sport Chrono Package, shortened manual gear shifter with red shift pattern and Sport-Tex covering on the seat centres. Also available as an option is rear-axle steering.

The numbers
The Porsche 911 Carrera T is powered by a 370-hp twin-turbo engine delivering 331 lb-ft of torque, which can accelerate from a stop to 100 km/h in 4.5 seconds when equipped with the manual gear box – one-tenth of a second less than the 911 Carrera – or in 4.2 seconds with the optional PDK dual-clutch transmission.

Buyers can place their orders as of now, with starting price for the model set at $116,500.

The 2017 year has shaped up to be a momentous one for the Porsche 911 and its manufacturer. Already, this year has seen the debut of the new GTS models, the launch of the 700-hp GT2 RS, the addition of an Exclusive Series to the Turbo S lineup, and a new record set at Nürburgring by the GT3. Porsche also sold its millionth unit of the 911 in 2017. 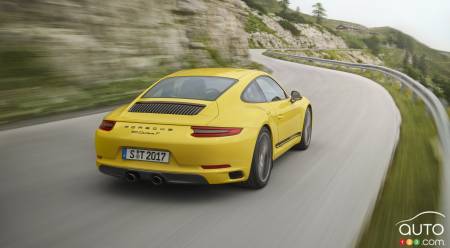 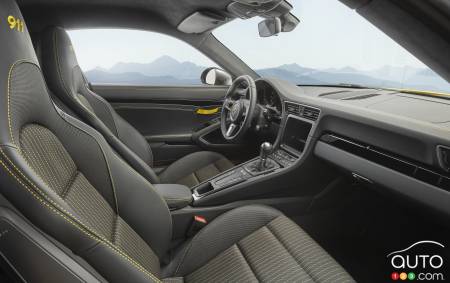 Learn more about the Porsche 911 and find out why it was chosen best in its class during our 2018 Auto123.com Awards.

In 2018, the 911 Carrera T is among the brand’s most affordable models, yet it still manages to outdo the base Carrera version, thanks mainly to a few modifi...

The New Porsche 911 GT3 RS in a Word: Spectacular!

While the new 700-horsepower 911 GT2 RS has made headlines since launching in 2017, the GT3 RS edition is now getting proper love through a series of major u...