After juggling repeatedly with its diesel offerings in the past few years, and having long hesitated to embark fully on the development of diesel technologies for its product line, Porsche has finally made the decision to put diesel aside.

The decision clearly has its origins in the Volkswagen diesel scandal that erupted three years ago. But the automaker is citing other reasons explaining its decision as well.

Those reasons are valid, but it’s important to understand that they too can ultimately be traced back to the VW scandal.

"Porsche is not demonizing diesel. It is, and will remain, an important propulsion technology. We as a sports car manufacturer, however, for whom diesel has always played a secondary role, have come to the conclusion that we would like our future to be diesel-free."
- Porsche CEO Oliver Blume

In the view of the manufacturer, demand for this type of engine is on the decline – due to the scandal in no small part. Furthermore it is falling even in markets traditionally more attuned to diesel, for example in Europe. In 2012, only 17% of models sold by Porsche were powered by a diesel engine.

Since February 2018, the company has stopped offering diesel-powered models, with no significant drop in sales. What’s more, consumers are increasingly turning to hybrid models proposed by Porsche. In the case of the Panamera, 63% of buyers opt for one or the other of the advanced hybrid powertrains.

For the moment, European buyers looking for a diesel-powered luxury car still have some choices: Audi, BMW, Mercedes-Benz, Maserati and Land Rover are all still committed to the technology. It’s another story in North America, where only Land Rover and BMW (if it goes ahead with its plans) still offer it to consumers.

It will be interesting to see if other automakers follow suit in the coming months. 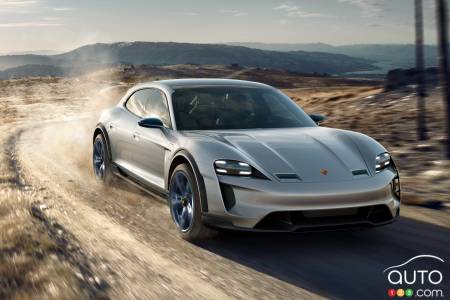 With the Taycan, Porsche shows the way, as it has so often in the past. This time the automaker makes the eloquent demonstration that it’s possible to preser...

Porsche Takes Us Inside its New Taycan EV

Porsche has revealed some of what its new Taycan electric car looks like inside, ahead of the model’s full reveal next month. Clearly, the touchscreen is the...