•    It is, we can confirm, a very capable offroad vehicle.

Calabogie, ON - For many consumers, a pickup truck is never big enough, never strong enough. Perhaps that's why so many pickup truck enthusiasts are now opting for the Ford F-250, Chevrolet Silverado 2500, GMC Sierra 2500 and Ram 2500, so-called Class 2 vehicles (trucks are, in North America, classified from 1 to 8 according to their weight combined with their total load capacity).

So why would consumers choose Class 2 pickups? Very often these pickups are used commercially, and very often they are used to pull heavy loads. Remarkably, their popularity has jumped 265 percent since 2019. This is according to figures provides us by Mike Szymkiewicz, Product Manager at Stellantis Canada, during the recent presentation of the all-new Rebel version of the Ram 2500 for the North American market. And this phenomenal growth also applies to Ford and GM products (note that Toyota only has Class 1 pickups), this in spite of the pandemic-era economic slowdown! The Rebel is added to the Heavy Duty lineup
The Ram HD 2500 pickup lineup already includes six versions, from the simplest Tradesman work truck (base price $58,340) to the very luxurious Limited (starting at $86,440). In between we have the Big Horn ($61,240), the impressive Power Wagon ($74,790), the popular Laramie ($76,415) and the Limited Longhorn ($81,890). Ram's designers understood (as did the competition, for that matter), that there is a wide range of tastes and needs among those shopping in the 2500 pickup segment, nearly as much in fact as among car buyers.

But Ram was missing an option that would attract those looking for a Ram 2500 that is both practical and rugged like the Power Wagon, and "sporty" like...a version that didn't yet exist in the lineup! The company decided that a 2500 version of the Rebel was called for, as it has been in the 1500 range for a few years. The Rebel thus sits between the Power Wagon (which already represents 12 percent of Ram 2500 sales in Canada) and the Laramie. Unique design
The Rebel version of the Ram 2500, which has a body like that of the Power Wagon, can be recognized by its specific all-black grille, its hood with a more "performance" design and exterior decorations unique to the Rebel version. So, the Rebel 2500 joins the Power Wagon, Ram TRX 1500 and Ram Rebel 1500 to form what could be considered the manufacturer's "performance off-road truck" line.

The interior, meanwhile, continues the theme Stellantis has used for all of its Heavy Duty trucks. The dashboard is similar, but it comes with a new 12-inch driver data screen and a new rearview mirror with blind-spot images on the ends. The large 12-inch screen is an option on this Rebel, and I must highlight the efficiency and ease of operation of the Stellantis UConnect 5 system including XM Sirius radio and Harmon Kardon's 750-watt sound system with 17 speakers.

Available only as a four-door Crew Cab with a 6-ft, 4-in mid-size bed, the Rebel can be equipped with either bucket seats or a bench seat in front and a flexible bench seat in the rear with your choice of leather or cloth upholstery. Incidentally, accessing the interior is no easy task with the Rebel 2500 (its ground clearance is slightly higher than that of the Power Wagon). Indeed, the sill is very high and there is no step (an accessory you don't want to have in off-road situations since it can get snagged). There is, on the other hand, a kind of small and rather thin step under this threshold, but it's just not wide enough.

I'll save you a long description of the bed since it is rather bare. Stellantis leaves it to Ram owners to equip their beds as they see fit. However, the optional Ram Box with lockable exterior compartments is available. I would have liked some sort of rear-loading aid to climb aboard though.

Stellantis announces the maximum load capacity of this cargo box at 3,140 lb. 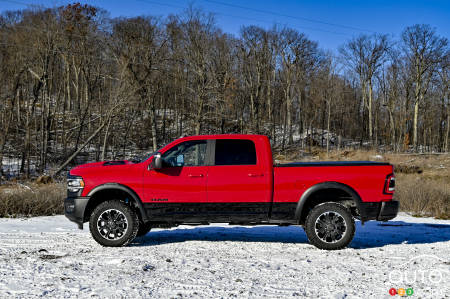 A robust powertrain
The Rebel HD 2500 is available with the base engine, a 6.4L HEMI V8 that makes 410 hpand 429 ft-lb of torque. It's combined with an 8-speed automatic transmission and an electronically controlled Borg Warner transfer case (on the dashboard) which, however, does not include 4x4 Auto mode (there's only 2WD, regular 4WD and 4WD geared at 2.54:1).

The Rebel is also available with the Cummins inline 6-cylinder turbodiesel (370 hp, 850 ft-lb of torque), but only with the 6-speed automatic transmission (and, of course, the transfer case for four-wheel drive). However, as ironic as it may seem, the Rebel 2500's towing capacity with the diesel engine is lower than the Rebel with the V8. Why is that? Most likely because the diesel-powered truck is heavier than the gasoline-powered truck.

Incidentally, the Power Wagon version does not offer the option of the turbodiesel engine because, apparently, there would not be enough space for cooling with a Warn winch. The Warn 12000 winch is available with the gasoline Rebel, but not with the diesel engine.

The Ram Rebel HD 2500 has a multi-link rear suspension (while the competition sticks to conventional leaf springs). What's more, as an option, buyers can opt for rear air springs that allows you to lower the vehicle when it needs to be loaded (the sill then lowers to a more attainable level) or to help attach a trailer. The Bilstein shocks react according to the Frequency Response Damping principle, which helps reduce rear suspension bounce.

For towing, Stellantis offers optional cameras for the Rebel to get a good 360-degree view of the trailer. There are even tire pressure monitors. Note here that these Rams come with the Reverse Guidance System, which makes it easier to manoeuvre while backing up with the trailer attached. 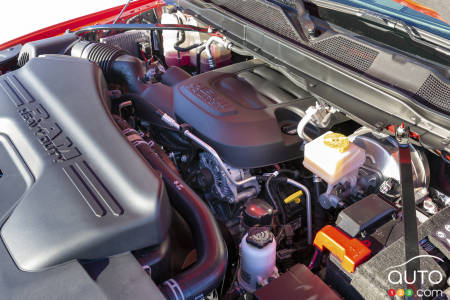 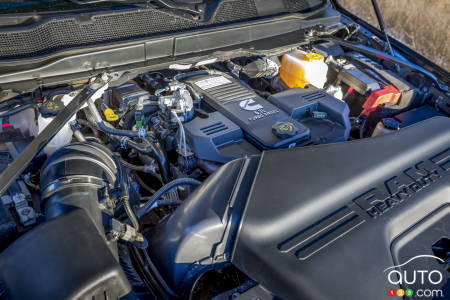 On and off the road
Stellantis Canada chose the Calabogie area near Ottawa for this initial test drive of the 2023 Ram Rebel HD 2500. The trucks were Canadian-specification vehicles even though they had Michigan plates. Two of the vehicles were gasoline-fed, the others diesel. I chose a gasoline-powered version (more relevant for Auto123 readers since diesel fuel is more expensive here), but with the optional 12,000-lb Warn winch.

As for performance,no need to worry about raw power: a Ram Rebel HD 2500 can reach 100 km/h in about eight seconds, if needed of course. Passing is equally painless. Though while the Rebel is intended for sportier driving, it'S no race car car. Indeed, our first test drive segment took place on country roads at moderate speeds. Even when those roads got twisty and sometimes bumpy, the Rebel delivered excellent handling, although the steering (with ball bearings) felt a bit soft.

However, I did consider the 7500+ lb weight (and even more for the diesel version) that characterizes this vehicle. As it happens, I had driven from the Montreal area to Calabogie in a Ram Back Country 1500, a pickup I consider one of the most comfortable on the market. That truck is very smooth on the road, but the Rebel HD 2500 wasn't far behind. In fact, I would wager it's more comfortable than the competition's similarly sized vehicles.

As for fuel consumption, it should be calculated over a longer period than we had with the vehicle. But it's realistic to assume the gasoline engine version can reach around 14.0L/100 km on the road (though much higher in the city), while the 6-cylinder diesel should do better. 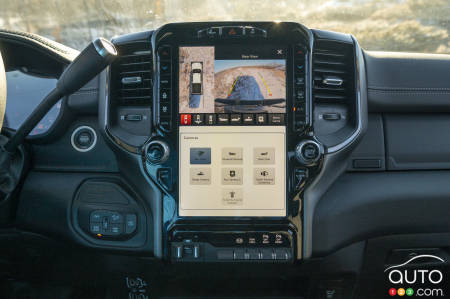 The most exciting part of this drive program was, not surprisingly, the off-road drive. The Stellantis Canada representatives chose a demanding electric-pylon maintenance road. It had snowed a bit the day before and the weather was cold enough to create ice patches in the ruts. Stellantis engineers calculated that Rebel HD 2500 owners generally won't be not be attacking very rocky trails like they would with a Power Wagon, but rather rougher dirt roads that might lead to a lake in the woods or a cabin deep in the forest. The sporty aspect has to take precedence over extreme excursions with this model, remember.

Our off-road trip went off without a hitch, but it took a truck with the capabilities of the Rebel to make them happen. With the transfer case in 4WD Slow and the rear axle locked, climbing steep hills was a breeze for this Ram. Stellantis Canada didn't plan any towing sessions with these new Ram trucks, but we can tell you that with the gas engine, this pickup has a capacity of 16,870 lb, and of 19,980 lb with the diesel engine (the Power Wagon can only pull up to 10,590 lb since it has lockable front and rear decks better suited to off-road acrobatics than to towing).

What kind of success could this Ram have in the marketplace? Time will tell. But jiudging by how well its main competitors, the Ford F-250 Tremor and the Chevrolet Trail Boss-GMC Sierra AT4 duo, are doing on the market, things look rosy.

As for the choice between the gasoline V8 or the diesel engine, Stellantis' Szymkiewicz estimates that buyers are already half and half on this (remember that the Power Wagon doesn't offer the Cummins). 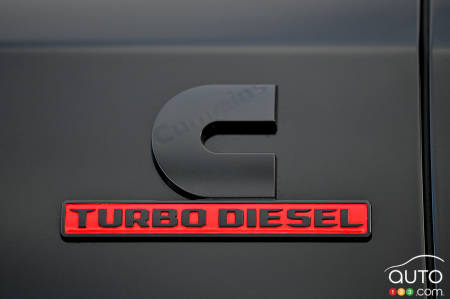 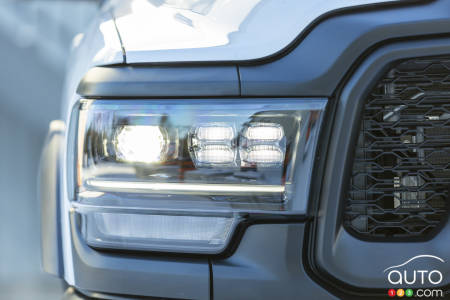 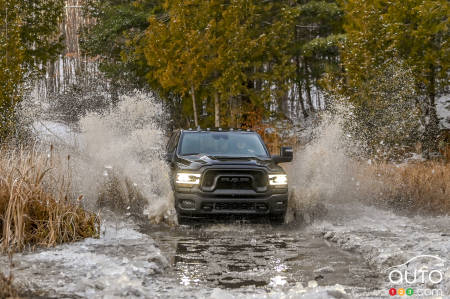 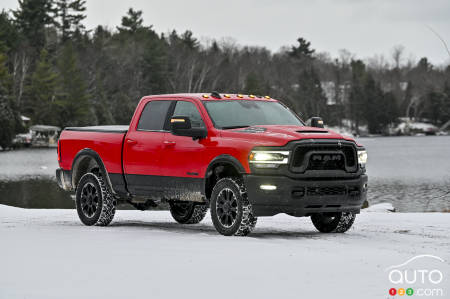 For 2022, the Ram division is offering a new optional G/T package that adds a bit of sportiness to the Ram 1500. Here's our review of a full-size truck that ...

As we wait to see what becomes of the Ram Rebel TRX concept, the Ram Rebel 1500 is the most rugged and capable variant in the model lineup. We took it up and...