Collisions on the road are sometimes inevitable. They will happen. What is preventable, at least in theory, is human error. But sometimes error creeps in anyways. The case of this Renault Twingo picking up a Ferrari 488 Pista is a good example.

This video showing the impact between the two cars is attention-grabbing, not because it’s all that unusual – it could have easily been avoided, and no one was seriously hurt. But it involves contact between a car worth barely $2,000 (the Twingo dates back to the mid-2000s) and one worth… a few hundred thousand.

The angle that shows us the accident isn’t optimal, and it doesn't give us a clear picture of how fast the Ferrari was going, but was can surmise it wasn’t crawling along, given that the car lifts at a Ferrari rally (the Ferrari Tribute 1000 Miglia) taking place nearby, and participants in which were passing through the Italian town of Cortona. The incident took place on June 20th.

The scene shows a Ferrari Portofino passing in front of the camera just before the Renault Twingo comes out of its parking lot. Obviously, the driver didn’t see the Ferrari 488 Pista coming along. One can guess that by the time he should have seen it, his head was already turned in the other direction, from which another vehicle was approaching. The driver of the Twingo never saw the Ferrari, and in fact, he pulled wide into the road as if to better block its path, resulting in the collision.

The driver of the Ferrari suffered minor bruising, mainly because the impact apparently triggered the 488 Pista's airbags. It's hard to see the extent of the damage to either car, but it's safe to guess that the Ferrari got the worst of it, and it will be just a tad more expensive to repair. 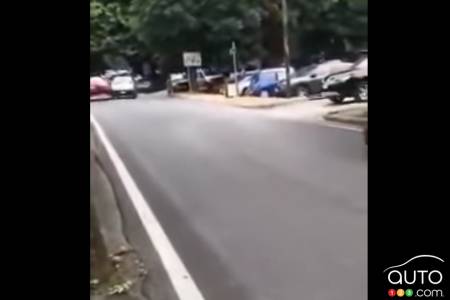 Photo: YouTube (Il Dominiti)
Collision between a Renault Twingo and a Ferrari 488 Pista

Video of Accident Shows What Can Happen to Stalled Vehicl...

A crash this week in the state of Minnesota should serve as a lesson in the dos and don'ts of fender benders. It’s also a reminder about the dangers of being...

The Car Museums of Italy: The Ferrari Museums

Auto123 went to Italy to visit three of the finest museums dedicated to the glories of Italian car designs and performance. Today, in the second of three ins...

Ferrari celebrates one client's loyalty with the Superame...

Last Friday the Ferrari Superamerica 45 made its world debut at the Concorso d'Eleganza de Villa d'Este in Italy. If you've never heard of the machine before...