An updated version of the Jeep Compass will be shown July 14 as part of the Chicago Auto Show activities, which was moved from February to July this year due to the pandemic.

The presentation of this model is part of a long list of new and revised models to come from the Stellantis group of brands this year.

Of note, this will be the first in-person unveiling of a new vehicle at a North American show since the Covid-19 pandemic began, as states lift restrictions on events and gatherings. Jeep will also introduce to visitors in Chicago a new package for the Wrangler, the Xtreme Recon. 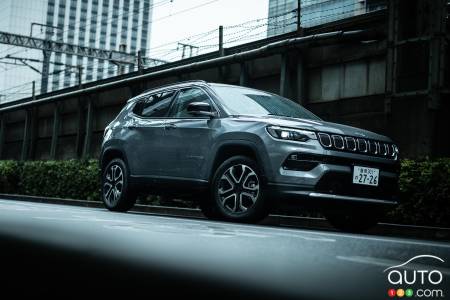 The Compass has been one of the vehicles hardest hit by the global microchip shortage. According to estimates from AutoForecast Solutions LLC, production of the SUV, which is manufactured in Toluca, Mexico, is behind by 64,000 units this year. Stellantis confirmed earlier this week that the Toluca plant will also be closed during the week of July 5.

Not surprisingly, the model's sales performance has suffered as a consequence. Compass sales dropped 33 percent in the first quarter of 2021 compared to the previous year. Beyond the chip shortage, the Toluca plant was not operating at full capacity will it underwent upfitting. In short, it sucks to be the Compass right now.

That said, the SUV’s future remains pretty solid as it continues to sell well otherwise. It actually had its best years in the U.S. market in 2018 and 2019 with 171,167 and 143,933 units sold, respectively. This was after the withdrawal of its twin from the market, the Jeep Patriot, which previously had always sold better than the Compass - except in 2017, the year it bowed out.

The update can only help its cause; now the challenge is to get enough of them built.

Jeep introduced a redesigned version of its Compass at the Chicago Auto Show, and the Canadian division has just announced pricing. The 2022 edition comes in...