Route 66 with Nissan, Day One: From Chicago to Cuba

Route 66 with Nissan, Day Two: From Cuba to Tulsa

For our third day of crossing the western half of the United States on the fabled Route 66, we veer even further south and, most importantly, towards warmer climes. To say we froze our little extremities off during the first two days of our adventure would be an understatement. Today, though, we enjoyed temperatures hovering around 17-18 degrees Celsius - enough to broaden the smiles of even the grouchiest among our group of participants!

Our target today was a broad one: Texas. More precisely, our destination for day’s end was Amarillo, where you find, among other things, the Big Texan Steak Ranch restaurant, one of the Route 66’s biggest attractions.

This establishment is unlike any other bistro you’re likely to encounter. It starts with the promotion aimed at getting people in the door, which is the offer of getting your meal free of charge… on the condition you can finish it within one hour. Sounds easy, except that the meal in question is a 72-ounce steak, accompanied by a handful of side dishes.

Hard to think of anything more typically American.

For our third day on the road, we were given a 2020 Murano SUV, which we’ll get into again in a few days for a second experience. Stay tuned for a more in-depth review. Meanwhile, here’s our super-secret private diary entry for today.

On exiting Tulsa, Oklahoma in the a.m., we came to the Cyrus Avery Bridge, priorly known as the Eleventh Street Bridge. This structure has particular significance because, before it came to be used by cars trekking along Route 66, it was a literal bridge between the city of Tulsa and the oil refineries located just to the west of it. It was also an important element in helping develop the region economically. Opened to circulation in 1917, it was expanded in 1934 to its present size. The bridge was closed to traffic in 1980.

Thanks to the tireless efforts of groups devoted to preserving as much of the traditional Route 66 as possible, it was spared demolition, and currently an initiative is underway thast seeks to build a museum next to it. If you’re wondering about the provenance of the Cyrus Avery name, it refers to the man responsible for the very creation of the road we’re traveling. He is recognized, in fact, as the Father of Route 66.

In the town of Arcadia, Oklahoma, you come across a round barn that has inadvertently become one of Route 66’s bigger attractions.

The structure was in fact completed in 1898, almost 20 years prior to the establishment of Route 66. As fate would have it, the route ran within a few metres of the barn, and over the course of time it became a well-known reference point for those heading (mostly) west. By the 1970s, however, the structure was pretty much in ruins.

Fortunately it was designated a historical monument in 1977, and after it was acquired by the Arcadia Historical Society in 1988, work began to restore it. In 1992, the barn was opened to the public. I myself have left a few of my hard-dollars behind at the gift shop, if only to support those who have been so  dedicated to preserving Route 66. 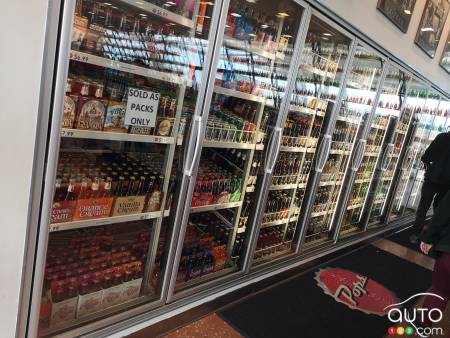 Our lunch stop on this day was the Pops 66 Soda Ranch. And what makes this place special, you ask? Because you’ll find there some 700 different flavours of soft drinks. Just to make sure you don’t miss the spot, outside stands a massive 66-foot bottle that’s lit up at night. If you’re a fan of sugary drinks, you’ll think you’ve died and gone to heaven. The food’s pretty good as well…

Father long in the town of Clinton, Oklahoma, we stopped at an interesting little museum that traces Route 66’s history through the decades. Inside we discovered quantity of old objects, including cars of course but also newspaper clippings, artifacts and various tchotchkes. A stop we all enjoyed…

When traveling west, whether you’re starting in Halifax, Vancouver, Toronto or Montreal or even at the Oklahoma-Texas state line, you can expect to enjoy some spectacular late-day scenery – if the weather cooperates.

Ending our diary entry with this sunset snapshot is a way to set the table for what’s to come. The next four days of driving will take us through some breathtaking places. Not that the journey up to now hasn’t had its beautiful and compelling moments. More on that in future posts.

Nissan has announced details and pricing for the U.S. for the 2019 Nissan Rogue. The crossover is the brand’s top seller in both the U.S. and Canada. Any dif...